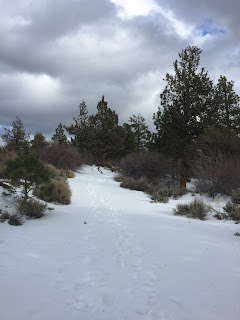 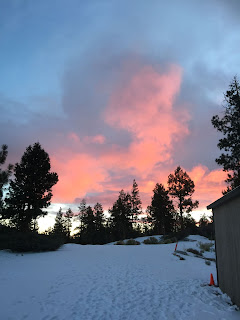 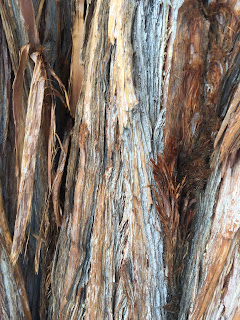 Taking a wee nap before I make soup for dinner.

Dears-up in the mountains on retreat but this time cooking with Jessica. Whew, hard work. Getting here was a major ordeal but after surviving SFO the day after Xmas, I feel pretty invincible. It was jammed with travelers of all kinds all pushing and shoving. I breezed though security because no one was paying any attention. Those poor workers were not getting paychecks anyway.

There was one woman who was directing traffic and she was so cheerful and friendly. In a sea of misery, she shone like a light house.

I lugged a quan yin and a heavy bell to the retreat center. And they stay here. (hooray!) I don't have to break myself getting them back to Seattle.

This coming year I'm gonna get a physical, a nutritional assessment for old people and think about a knee replacement (ug). That one I'll have to schedule and figure out who can help me for a few days afterwards.

But what about old people and food? Supplements? I've got some problems with dairy now :-( and i've pretty much gone vegan again but I wonder about protein.

One thing about Uber. I missed the airporter in San Rafael ( a very nice bus that costs $20 and gets you to the airport in an hour. I got up at 5:15, hustled to the station and effing missed the bus. I called Uber and waited...and waited and finally canceled. And if you don't cancel within 5 minutes they charge you ($71!!).. Then I called for a regular cab and that puppy was over $100 !!!! Grrrrr.

It was worth it because my driver was nuts. He asked it I could see the chemtrails and when I said I could, he launched into a 'theory' of GO engineers (?) who are manipulating the weather by putting something in jet fuel that then creates the chem trails. Wow. I actually tried to talk to him reasonably, obviously a mistake because he claims that scientists are getting rich (?) on the whole global warming situation. Which isn't real, according to him. We're getting colder based on sun activity (????) So ok, I eventually stopped talking and mentioned that the chemtrails were getting pretty as the sun rose. Damn.

Then I called my ex who is a shrink and he mentioned some guy who is claiming all this stuff and it's all on the internet.

BTW, contrails (not chemtrails) are formed when water on the wings of planes enter the atmosphere after freezing on the wings...

He did get me to the airport on time. So there's that.
Posted by beth coyote at 2:05 PM 2 comments: 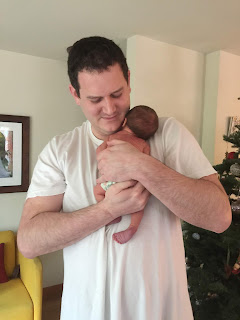 Two hundred ninety million.
That’s how many dollars Monsanto
was ordered to pay the dying man
when the company failed to warn him
about how the poison they made
to kill weeds would also kill him.
Two hundred ninety million.
That’s how many miles
the Voyager 2 moves away
from the earth every year. And though
it was made to do so—to travel
past our sun’s magnetic field—who
could blame it for moving away
from this dying planet at
thirty-four thousand one hundred ninety-one
miles per hour. If that number were dollars
today, it would be equivalent to eight thousand dollars
in 1977 when the Voyager 2 was launched.
And eight thousand, that’s how many sacred
elephants there were on the banks
of the Six Tusker Lake in the Himalaya,
elephants who flew in the air, and sages say
the Buddha himself was once born as son
to the chief of these eight thousand elephants.
Yes, sacred and magical things happen here
on the earth, despite the greed,
despite the poison. I was seven
when the Voyager 2 left, and since then
it’s traveled eighteen and a half billion miles.
If those miles were pounds,
that would equal more than a million
large African elephants, though in all of Africa,
there are only four hundred fifteen thousand
elephants left, down from five million
just a hundred years ago. What I am saying
is that as the Voyager 2 enters interstellar space
things are strange here on Earth, and we seem
hellbent on our own destruction, but I
am so grateful to be here, still. Even as
the Voyager 2 hurtles beyond the heliosphere,
I find myself still falling in love
with the twenty-seven thousand three hundred seventy-five
days I have to live,
and the earth’s twelve thousand
species of grass, and the five thousand stars
visible to the naked eye and the two hundred six
bones in the body, all of them working to help
us run toward beauty, yes, grateful
for two hands to hold one beloved face
and, amidst all this enormity, the absolute absence
of sufficient words to say how holy, how incalculable is love,
and how marvelous, really, to stare up
into the familiar night sky and imagine
all boundaries we’re just beginning to cross.
Posted by beth coyote at 2:14 PM 2 comments:

Got light, got dark, got light again

We of the NW climes will be sitting in our homes and the hand of de lawd will darken the skies in the middle of the day and it may feel like the end is nigh. Then the rain comes, then the sun may or may not come out again. Then after all that excitement, it's four PM and dark for real because we are ALL THE WAY UP HERE in the northern latitudes when darkness is a serious thing.

I read a book review in the NYT today about a girl raised as an evangelical (she got out). She declared that those folks are expecting the END and they're ready with canned soup and bottled water. I don't think that's gonna do the trick. 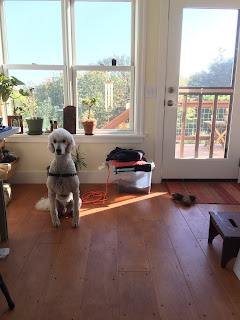 This is the famous 'poodle stare'. Felix sits and bores thoughts into my frequency. I think the message is something like, "why are we inside look at it we could be out there chasing squirrels, tennis balls, other dogs huh we are missing all the fun being inside with the damn cat etc.'

I am a disappointment to my dog, I can tell you,
Posted by beth coyote at 5:56 PM 4 comments: 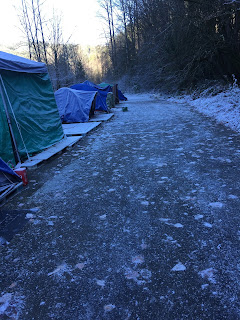 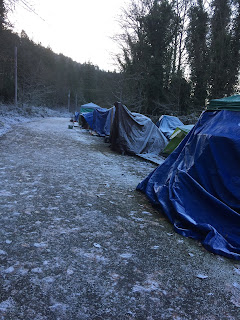 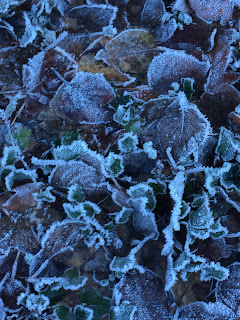 Yesterday Felix and I went to Tiger Mountain, about 20 miles outside Seattle for a hike. Homeless encampment #4 was back, at the entrance to the trailhead, just off the freeway. As you can see, it's very cold now.

I stopped in at the admin, a blue tarp shelter with two large kerosene heaters and a few guys hanging out. The cigarette smoke was thick. I gave them a twenty and wished them well.

That's all. I got back in my warm car after we hiked and drove home to my warm house. my big warm house.

The car repair place just told me I need $2000 worth of repairs. Shite.

The last time this happened, I asked about the used car salesman and bought a newer used car. This time I'm gonna just...do it. Pains me to but cars, like knees, wear out.

Time to get a NYT and walk the dawg. He is ALWAYS cheerful. The nature of dogs confounds me. I guess when your memory is about 3 minutes, you're never troubled about anything.

My Salvation Army cape had big pockets inside
I slid steaks, jars of honey, butter into the dark folds
I was so slim with my long hair
As I walked out the door, the purloined food breathed out
so neither of us would get caught

we paid the rent
rode the trolley
brought home a cat
we were free
no family
no friends
no future we cared about
Posted by beth coyote at 12:09 PM 1 comment:

Judith and I went  in spite of a flat tire and a sick kitty. Lola stayed at the vet for 24 hours getting IV fluids and waiting for labs. A bladder infection, as I suspected. For $900!!! Egad.

Then they gave me a wee bottle of antibiotics and say, "Once a day, orally." They don't say, "Ha ha, good luck with that."

Cats are smart. They feel that something terrible is about to go down as you approach them with a towel and a syringe. So they head out to spaces where you are unable to reach them. And you are dragging them out by a leg or the tail and further traumatizing them because they are thinking you're about to kill them or put them back in the cat carrier of death.

When you finally wrap them in a towel, then they throw their head around so you're basically aiming for the mouth/teeth area when it whips by you, getting fish flavored medicine on your shirt and all over their face. Hopefully some of it landed IN their mouth and you're good til tomorrow when it's time to do again. For 10 days.

At least it's not a pill. Pilling a cat is pretty much the worst situation. No cat will stand for it. It is beneath them. It doesn't matter that you've explained that they are ill and will feel much better. They don't give a shit. Giving a cat a pill guarantees that you will be bitten and/or clawed. You will be bloody and your cat will hate you. They give side eye and start growling. Then comes the slashing.

Anyway, the retreat center is sparkling and when I got home with Lola, I found that Felix had torn up the rug that I just bought. He is in the bedroom on an extended time out. As least the rug (screaming deal) was only $100.

Why do we have animals? I know this is a rhetorical question...and by the way, why is there an 'h' in rhetorical? Seems completely whimsical.
Posted by beth coyote at 7:04 PM 5 comments: