I have a new tenant. Her name is Emily and she is a partner in the midwifery practice. She's young and bright and full of energy. She remembers way more than I ever will. Or could. Our 'boss' Sara has left for Texas to disconnect her mother from life support. We are scrambling to figure out the call schedule and the patient shuffle. Poor Sara. Such a heavy burden. Her mother was her guiding light. Her mother and I are the same age. It's so interesting to contemplate, our demise. When? And how?

Dealing with some aches and pains which have not kept me from the swimming pool, thank the baby Jesus. I have visited a nice young PT who has me doing exercises with stretchy things. Humbling. The aging body and mind.

I'm wondering if there is a person or persons who could advise me about heating this old house. The gas furnace is looking geriatric and only heats the front of the house, the living room and kitchen. The back of the house has electric wall heaters that are mostly inadequate. I have solar panels and could have some monstrous healing system back there because my electric bill is nominal. I wear my coat in the house and heat my bed with a mattress warmer (yummy). Still I feel very 17th century with bundling up in the house. Judith lives on a houseboat and that's cold! She's always got her down coat on.

I'm grateful for the cold. Especially when I think about the dreadful heat we had last year and will again.

My children and grandchild are visiting for my birthday in February. I am beyond happy about that. I have traveled back and forth to California numerous times and now it's their turn to visit me. The only thing I want to do besides cook and eat and hang out is go to the Korean spa for a few hours to get scrubbed and massaged and soaked. And eat Korean waffles roll-ups (divine). 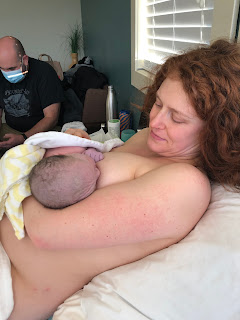 Thich Nhat Hanh died on the 22nd, in his home temple in Vietnam where he became a monk at 16. He was 95 and had had a stroke in 2014. Photos of him being greeted at the entrance to the temple, a small old man in a wheelchair who could no longer speak, were beautiful and bright. I'm sure he was tended to around the clock as a revered and beloved teacher. His nickname, Thuy, meant teacher.

I have been crying a lot. It surprised me, the depth of my grief. And then I recall what my life looked like when I stumbled into a small dark room where people were meditating. I was so sad and vulnerable and fragile. It was 1995 and I was involved in a lawsuit a family had brought against me and my partner for a baby who was damaged. It doesn't matter the details now. We were released from the suit after two horrible years of lawyers and depositions and endless paperwork. But my/our world collapsed. Every day was full of dread and fear. Would I lose my falling-down house I had just bought? Would I ever work again? As they say in Buddhism, the eight worldly winds were blowing from every direction, knocking me down over and over.

The small dark room held a community of people who were following the teachings of Thich Nhat Hanh, a Vietnamese monk who had opposed the Vietnam war and had been expelled from his country. He was a friend to Dr King. He established centers all over the world to teach mindfulness and meditation,  to bring peace and happiness to others. His message was one of engaged Buddhism.

In that dark room, I finally breathed fully for the first time in what felt like months. I didn't have to tell my story, I could just be. I went week after week, involving myself in the community. We eventually bought a house that we turned into a Dharma hall. Our teacher, trained by Thuy, came from her rural home to offer retreats and Dharma talks.

I remember how silly I was, how I wince at the ways I misbehaved, not fully understanding the gift I had been given, to begin to comprehend my tangled thinking, my reactivity and the ways that I was contributing to my own suffering.

Almost 27 years later, I can fully grieve for the little monk who worked tirelessly to bring gentleness and love to all of us, to teach us to love ourselves without reservation.

"Even when the cloud is not there, it continues as snow or rain. It is impossible for the cloud to die. It can become rain or ice, but it cannot become nothing. The cloud cannot become nothing. The cloud does not need to have a soul in order to continue. There's no beginning and no end. I will never die. There will be a dissolution of this body, but that does not mean my death.

I will continue, always."

The question was, "What is worth saving?"

Compassion is worth saving, for myself, for others, for the small and large lives all around. When I think of the exhortation to preserve life, not to kill, I am confronted daily with what that means. Does that mean the ants that are already appearing by the back door, making their trails to the kitchen where there are crumbs, drips of honey, errant bits of onion and broccoli from dinner. They like honey best, always looking for sugar. I am too, always seeking sweetness among the troubles of a life.

Ants have a queen somewhere. I envision her on a tiny antish throne, her loyal, inexhaustible subjects working tirelessly and selflessly to bring her the fruits of their industry. Do ants have a soul? The theological pundits would probably say not. But what do they know. The engine of an ant, the spark that animates them also animates us. I'm not sure about the soul thing? Does having a soul put us on a hierarchy of importance? To whom?I recently heard a talk about the father, son and holy ghost. The holy ghost mystifies me, always has. Then there's the triple goddess, the three faces of women, the triple jewel and so on.

But back to the recommendation to not take life. This winter my house has hosted a plethora of tiny winged bugs. I couldn't figure out their generation. What was the point of origination? Not the compost bucket. Not a dead critter the cat brought in. (Reminds me of the dead robin under my bed but that's a story for another time.) These wee beings were on the window sills, on the bathroom mirror, by the stove. And they were fragile. I could take out a legion of them with one swipe of my sponge.

Here's the dilemma. I am taking life, their life. They may have families, a culture (music, literature?), a purpose in the grand wed of life. And are they less important than polar bears, or orcas, or trees? Do I let them be, to live and die as we all do, as we all must?

This morning very early I awoke and baked a little squash, made two breakfast burritos with egg and beans and cheese and spinach, threw in some yogurts and a loaf of homemade bread and a jar of apple butter and went down to the public market and saw the monk standing with his begging bowl. I bowed to him and gave him all the food and he sang a prayer of gratitude and wonder.

I told him when I am cooking for him,  I do it as mindfully as I can. I remember I am cooking and serving the Buddha, as the example for us all to fully awaken from our dream of life. He is the stand-in for our purest desire to be better people, to help and serve and be kind whenever we can. I told him all that. He reminded me that there are bad monks and I'm sure there are because we're all human and we are capable of terrible things. It takes courage to show up every day and be a good person, not an asshole person. I have some ways to go because of anger and sadness and disappointment but it's always good to make an effort.

It is very early in the morning to go meet the little monk. It's almost like this secret and weird thing I am doing. It's part of my spiritual practice.

I was very happy to see he was wearing actual shoes in the rain. He reminded me that in Asia, the monks go for alms in their bare feet. Quite impractical in the PNW, indeed. 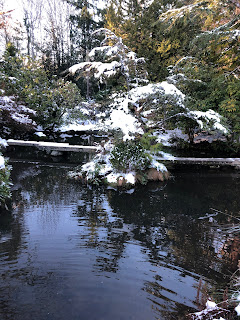 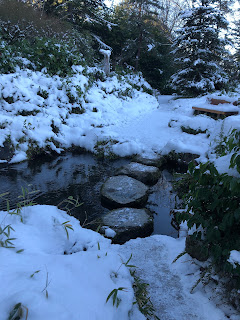 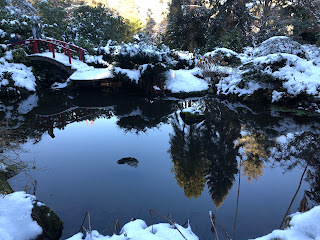 Felix and I visited Kubota's garden yesterday, 20 acres of gorgeous Japanese landscaping that is 100 years old.

As long as we carry a load bigger than ourselves.