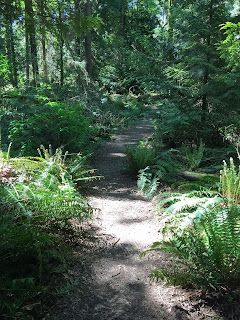 Such good fortune to be close to this beautiful urban forest. Where Felix and I go almost every day. Someone in labor tonight and I'll be getting a call so better go to bed. Saw babies and pregnant mommas all day. Tired, very tired.

For being so wee, hummingbirds are pretty fierce. They don't share at the feeder and they 'chirp' very loudly at one another to move aside.

In spite of that, their flashing magenta and green startle my heart. 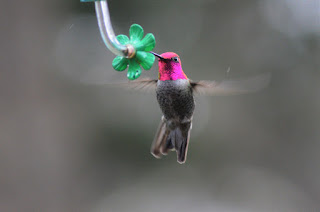 Time to visit my pea patch. At least there is no roaming chicken to dig and eat my starts.

Posted by beth coyote at 9:16 PM No comments:

Just streamed a Netflix series called 'Special', written and acted by a gay man with CP. It's wonderful and funny and poignant and all that.

Did I say funny? And gay sex and swearing...

Each episode is only 15 minutes and I can tell you, it'll leave you wanting more.

About to take the dog out for our daily walk. Danced with wild abandon last night and today I feel...fine. Hard to get up from my cushion after meditating but hey, still moving.

I told my friend Ryan last night that I'd totally date him if I were much younger and straight. He laughed, thanked me and we danced together on the floor, rolling around. There was one guy last night who wore very tight black shorts and a shirt. Last night he took off his shirt (um, eww) and wriggled in front of the mirror for an hour. I was chastising myself for being so judgmental but really I was having the age old argument with myself that women don't do that in public but men can. Harumph.

Feeling lonely lately. I so cherish my solitude and quiet. Often I don't listen to music unless I'm playing the piano. Just incidental sounds from airplanes, the washing machine, occasional barks from the dog.

Loneliness creeps in and  I feel a well of sadness that lives in my psyche. I've been investigating it and finding the same dichotomy: needing significant time alone and wanting companionship. Friends are great. My various communities are nurturing. The Dharma reminds me that we're never really alone...but there is it. Loneliness washes over me. I so relate to other elders who populate the hot tub at my local pool, their need to talk, to relate, to be touched by the hot water. Indeed, it's a regular social whirl over there. Folks come just to sit in the tub. They don't even get in the pool.

So I sit with my lonely self. I don't usually descend into self pity. I continue to dive underneath the feelings to see what's there. And from there I can find comfort for those feelings, that abandoned child, girl, and woman who finally has the luxury of time. I say that because I think I spent years trying to get here, with working, raising children, having intimate relationships. I was always reaching for....myself. Now here I am.

As a line in a book I am reading right now has said, "Who am I?'

I sponsor two young women in Alanon. Alanon is a program for family and friends of alcoholics and addicts. And in my case, mental illness and suicide. You who read here know some of this.
Today one of my sponsees called to tell me that she resisted stealing a pack of printer paper from her son's school which led to a long discussion of honesty.

There is the precept in Buddhism which says that we 'undertake the precept to refrain from taking that which is not freely offered.'

Ah yes. The small and the large. We concluded that honesty can be tied to happiness. I once went to a big box store for gardening stuff and realized that I hadn't paid for a pair of clippers, about 7 bucks. I went back into the store with the clippers and paid for them. The clerk was surprised and said the store wouldn't have even known.

I would have known. A far cry from my youth when stealing was some kind of subversive act. And perhaps the clerk thought about the woman who came in and paid for a pair of clippers because she was honest..at least that day.

More difficult are interactions with others. Do I steal time and attention from my friends? Do I hijack conversations by calling attention to myself?

I think about the times I've been robbed. While I work to forgive the thieves and to let go of the objects they've stolen, I'm also aware of the vast economic disparities that creates desperation.

I think about the times I've lied, exaggerated, and obfuscated. Honesty encompasses all of life, it seems. To say what we mean, to speak plainly, but with kindness, timeliness, and humility. How often do I watch my mouth so what I say is not going to hurt others?

Listening to Mozart's Requiem right now. May spring bless us all.
Posted by beth coyote at 8:56 PM 5 comments: