Winter approaches. The leaves are turning, wind is blowing. About to leave again, this time for Joshua Tree retreat where it is 90 degrees... Eden and I are going together. I am thrilled that my daughter will be coming with me. It's been my intention for all these years to never proselytize, I mean Buddhists don't really to that except for back in the day when I was asked 'Do you chant 'nom yo ko renga kyo?' Uh, no. Or the Hari Krishna people. Whoa, they were um, interesting. 'Have you been saved?' was another one.

What is it about us humans? We want everyone to agree with us, our world view, our belief system and then if we get push back, the other person is to be despised and shunned. Herd mentality? We all have guns in our community and we want to keep it that way? We all go to the same church? What the hell.

Posted by beth coyote at 2:26 PM No comments:

Tomorrow I go to the deep woods to be in silence for 5 days. 5 blessed days. Simple food, a routine of bells and walking and a bit of time with my teacher. Quiet. No electronics. A deer or two. The creek. 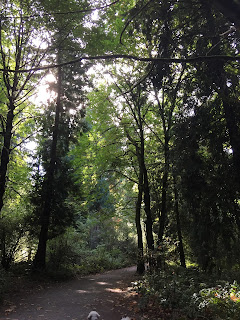 My tenant Ren came and said, "There's a dog down in the greenbelt and I think she's tangled up down there. Ren is taller than I am so she could see, which helps.

The greenbelt is my back yard. It's VERY steep, covered with blackberries and nettles. The trees are below but the slope is treacherous. Down in a nook was a small pair of ears and a little face. She barked, not able to move. So I said, 'Let's go figure it out".

We went to the trail at the bottom of the street and tried to bushwack, nope. We climbed back up the hill under the power lines, very steep, but nope. We came back to the back yard and decided to rappel down on a rope, which I had, hooray. I tied the rope to a tree trunk and Ren handed herself down to the pup. After offering treats and ascertaining that she wasn't injured, Ren held her in her arms and climbed back up the slope.

She had a name and phone number on her collar so we called it. The guy said she'd been missing for 3 weeks (!!). She was very thin with a goopy eye. We fed her cat food and gave her water. She quivered and shook.

Her owners arrived and we discussed a nearby vet to take her to. I was, of course, suspicious of them but they seemed sincere and they came over immediately.

When Ren got to the edge of the yard with 'Lucy', we both cried. We rescued a little being, something we could do in this world. 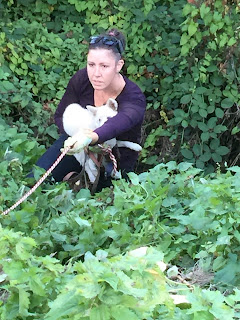 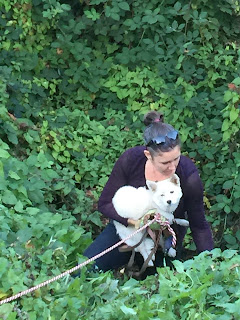 Posted by beth coyote at 8:04 PM No comments: