Doggone it. I just listened to this song that came up randomly in my play list.

Early this morning I volunteered to count the homeless for the State wide annual count. From 2-6 AM. I figured, hey, my work hours suck most of the time anyway.

I was in a team of three, a guy from Vashon Island, Gregory, our guide who is a homeless man with intimate info about the area we are canvassing and me. We had flashlights, hot tea, gloves and hats and raincoats. We were given maps of the unincorporated city which we deciphered with the help of the dome light in the car.

Gregory talked almost non-stop. His knowledge was vast and complicated. We learned that there are camps deep in the woods that line the freeway where local cops can't or won't go to because they are so remote. Two men died of exposure with the cold snap in December. Pretty young girls get hooked on meth and they lose their looks. Renton, the city where we were, has three meals a day for 'unhoused' folk. There are places to shower and relax if you're a family with kids. Otherwise, the shelters kick you out after 6AM so you have to find warm and dry places to hang out until the shelters reopen.

Gregory lost his housing after losing his 30 year job because of an illness. Sometimes he stays with his mom ( but her apartment is too warm at 70 degrees), sometimes he has an apartment. He was going for a job interview the coming week that he was excited about. He explained that there were folk who preferred to live outside-no rent, no landlord. One encampment even has a generator, heat and light. He seemed quite impressed with this situation. When my Vashon Island partner asked him about his wishes for the future, Gregory said, "Oh, I want an apartment of my own!"

Seattle is cold and dark and wet, for many days a year. Be well and safe, all my brothers and sisters.
Posted by beth coyote at 6:03 PM 1 comment:

It's been a week. The women's march in the cold wet Seattle streets. We met in my living room for poster making and tea. We ducked out of the march to warm up and eat Thai food. 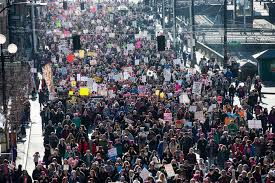 The next day I headed over to Bainbridge Island to see my dear dance teacher. I walked on and managed to take the wrong ferry and went to Bremerton. Oops. I came back to Seattle, got on the right ferry and about 10 minutes into the ride, witnessed a woman my very age step over the railing and fall into Puget Sound. She left a pair of shoes and a note and she said to a group of young women who were standing nearby, "I'm going now."

At first I couldn't believe what I was seeing...then people were screaming and running around, yelling for the captain to stop the ferry. These are giant vessels, not easy to stop. Someone threw a life preserver in the water near her but she was far away by the time a dinghy went after her with a rescue crew. They scooped her up and brought her back the the ferry. We headed back to Seattle where she was met by paramedics and an ambulance.

I'm exhausted today. What cheers me is to look at my living room carpet sparkling with glitter from our women's march signs. Right now I'm writing this post with a down comforter on my lap and the dog beside me. My body is tired and sore and so is my heart.

This morning I gave a talk about the 'undefended heart.' It's hard, comrades, to stay open to the world as it is. We do our little part to understand the roots of suffering and to heal ourselves, for the benefit of all beings. The woman on the ferry is with me today, her gesture, the shoes she left behind and the sobbing teenagers who watched her flight. How hard it is to stay here and feel the pain. We know. We're holding you in kindness. May you be well. May you be at ease.
Posted by beth coyote at 6:11 PM 4 comments:

I haven't been here for a while. On retreat in California, another desert retreat, this time with women (or womyn or womxn). We've been having a lively discussion about the proper word. Womyn was coined back in the day by white liberal feminists, according to the internet. Womxn is more inclusive of POC and trans persons so...like Latinx is not gender specific as is Latina or Latino. Whew. And asking what pronouns a person prefers is encouraged because we make assumptions, don't we and we can be wrong.

My trans friend is just a woman, end of the discussion. Actually she said, "I am a fucking woman".

We're all getting ready for the women's/womxn's march on Saturday. We're meeting for signage at my house and taking light rail to the rally. I missed the march last year because I was in Burma but I'm going this year. I hope the turnout is huge. The MLK rally here was sizable. I was working.

Last night I went to a training to count the homeless in King county next week. We form teams, one of us is a formerly homeless person and we hit the streets at 2AM. From 2 to 6 we move through encampments, find cars and RVs to count. We don't disrupt folks, or wake them or invade their spaces. They apparently have algorithms to assess the numbers. The tally is rather complicated. I learned that King County has the third highest homeless population in the country. Very depressing.

Gosh, I sound so lecture-y. Well, the county is going to hell.

In other news, I spent some time with a road runner while I was in the desert. He/she/they was, um, running along and he stopped to eye me. I just sat down on the sand and talked to him. I admired his feathers and his long legs. We sat in companionable silence for a good bit. My father's ghost is always with me when I encounter the wild. I didn't hear coyotes this trip but I know they're out there. The desert is very special. In the winter it is tolerable; 70's during the day and 40's at night. So hardy, those plants and animals.

This momma is in a tub of water, making noise and breathing loudly with contractions. I will miss being at births but I do love my soft warm bed. And my poor knees are so achey now. I'm a regular old woman/womyn/womxn now. With friends who are half my age.

Two films: The Shape of Water and Call Me By Your Names. See both to be sustained by the goodness of humans, even in heartbreak.

I'll be with all my sisters and brothers on Saturday. We must look honestly at one another and stand up for what we know is right. See you there.