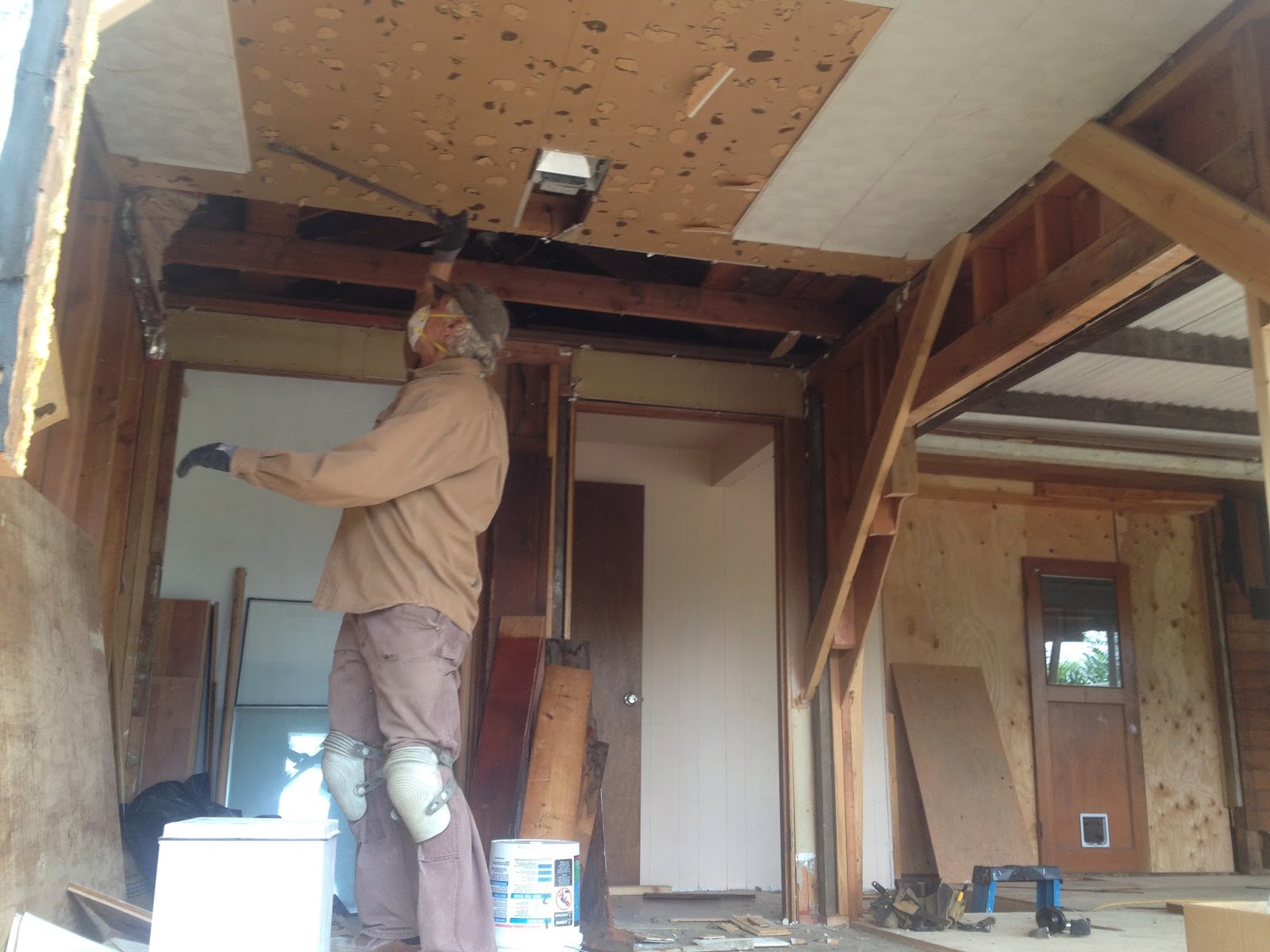 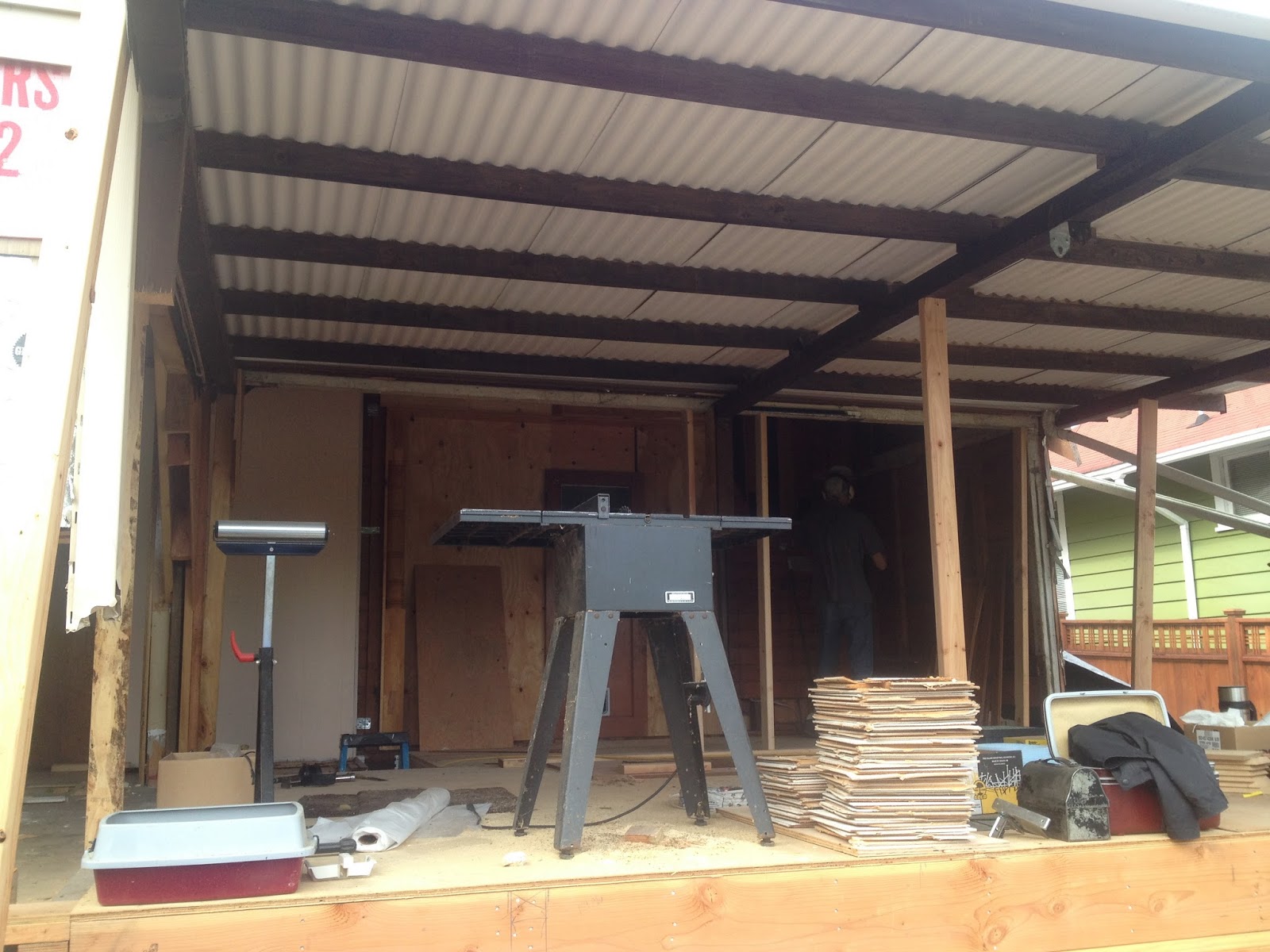 And tomorrow they are taking off the roof.

And I'm giving them another $15000. Fortunately I meet with the nice bank people tomorrow to shake hands and sign papers lending me $$ so I pay off the mortgage AND acquire a bigger loan. See how that works? Thought so.

My house is making me sneeze. Couldn't be the random dust from concrete and wood and ceiling tiles, right? Naw.

On the interminable plane ride to Europe, the free station in the back of my seat had this artist.


I've been playing her obsessively. And pretending I speak French, comme sa?

It rained. All night. It was the most beautiful sound in the world.

I had peanut butter for dinner. On a spoon. Then some edemame. My mother, rest her soul, would not approve. I am thinking about forgiveness. Forgiving my enemies. A Dorothy Day article in the Sun has inspired me. It's a short list.

My contractor insists on talking about the basement and wanting to put in a kitchen down there and sprucing it up for a tenant.

I don't have the $$ for this. I just want some rooms upstairs and a functional kitchen. Not fancy, functional. The basement is where the ghosts live and I don't think they care about a remodel. In fact, it might rile them all up.
Posted by beth coyote at 6:18 PM 4 comments:

What I did yesterday: 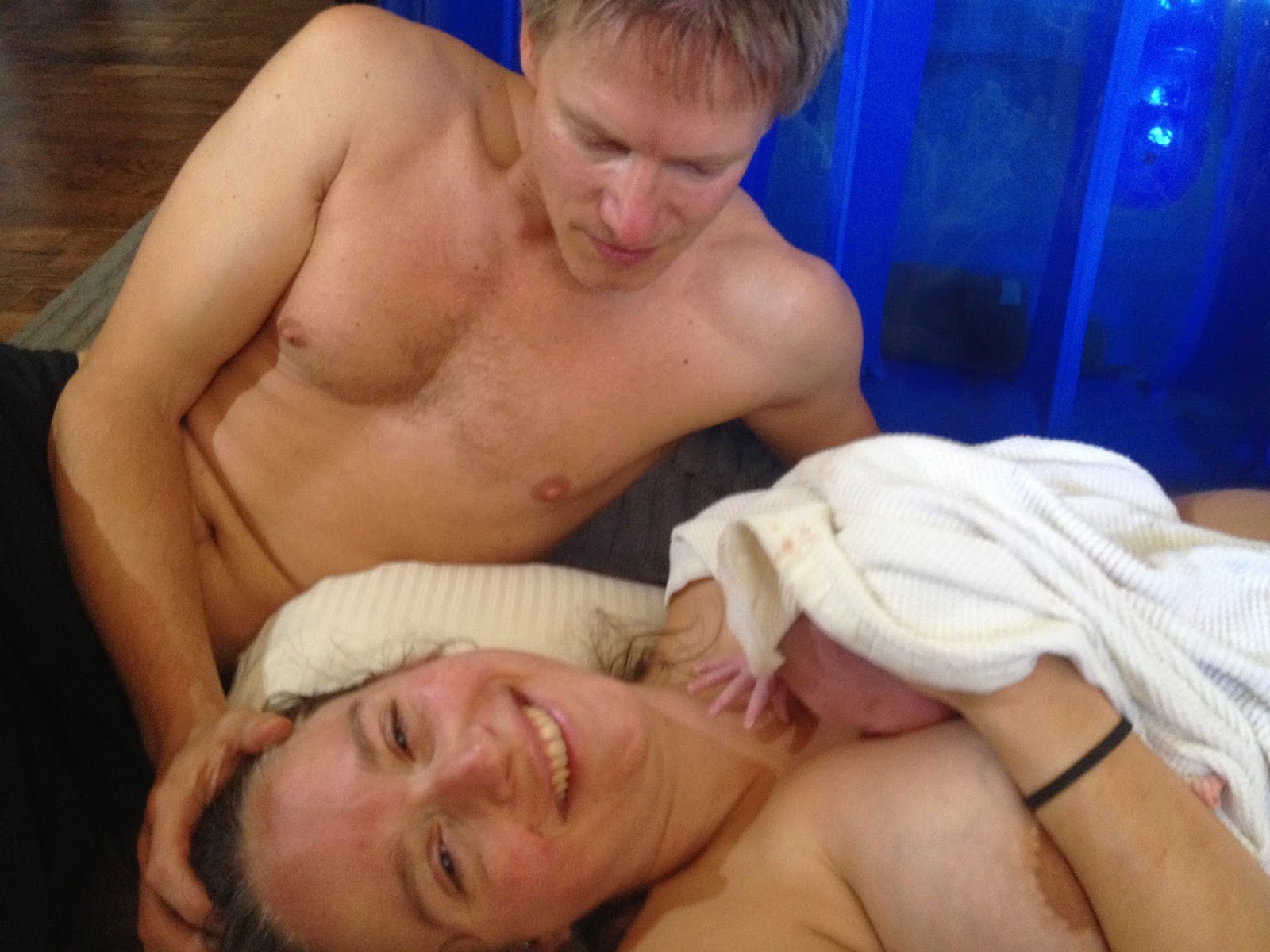 This couple were so in love during the labor, I felt embarrassed to witness. He kissed and nibbled her neck, she gazed into his eyes and smiled after contractions.  It was beautiful. This wee babe was born into that. Sometimes I can't believe what I do; the crazy hours, the complicated situations, the random stress and fear. And then there are people like this. My heart breaks with their love for each other and for their babe.

And today I did this: 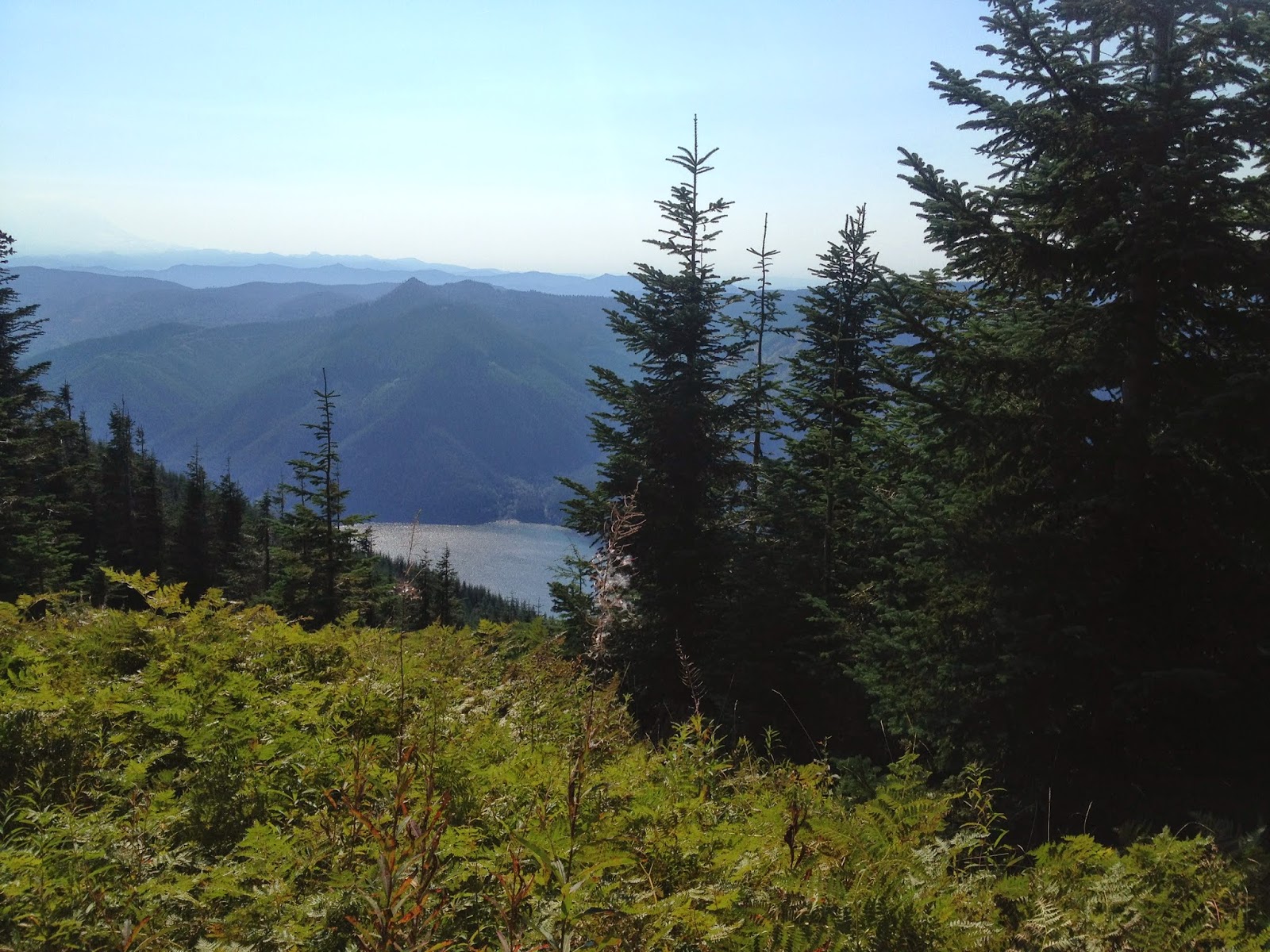 The view from the top of Mount Washington. And I died, or could have. Blistered feet, wobbly legs and weariness, profound weariness. It was hot, the elevation gain was significant and the trail full of rocks. We had climbed this mountain before but decided to do it again for the view. WTF. I'm totally whipped. Holly was unfazed and Felix was bouncy as usual. I whined for the last mile, really whined. Even though hiking is VOLUNTARY, people. I would have given anything for an airlift back to the parking lot.

We stopped at the Issaquah PCCon the way home, which, if you are familiar, is a ginormous natural food store in a fancy neighborhood off I-90. I looked a right mess, with my braid falling out, a bandana on my head for the sweat, clothes that were soaked and sweat-stained and I was seriously limping. A few times I moaned a little bit. Everyone else was polished with clean clothes and the glow of money about them. I was the person who crawled out from under the bypass to buy a lemonade.

I have a practice where I have some dollars in a cubby in my car and whenever I'm at a corner with a homeless person, I give that person a dollar or two. And then we chat, if there's time. Yesterday I gave a guy a dollar by the on-ramp to I-5. There is often a woman there who has a large selection of signs with sayings like 'Don't worry, be happy!!!' and 'God loves you!'. She's blonde with a thick braid. She looks like an archetypal farmer's wife. But she's sleeping under a blue tarp by the freeway.

The man yesterday reassured me. 'I'm ok, just a minor setback. Don't worry about me. I'm fine!' And as I drove away, I broke down. I've looked in the eyes of so many homeless humans and he got in there. I wept all the way home.

I asked about homelessness in Italy. The economy is pretty bad. The cab driver I asked said that because Italians have such extensive social support, the families are so big, someone down on his/her luck will be taken in. The only people I saw who were street people were Gypsies and they were regularly harassed by the police. In India, begging is a profession and part of the caste system. And the beggars are aggressive and pushy. It was an interesting practice to walk through the streets knowing you'd be assaulted by children and adults who had clearly identified you as a privileged foreigner. Besides, you were paler and taller (and probably healthier with full vaccinations and a full belly).

The children are sleeping again under the overpass on my way to work. They are there in their sleeping bags on the pavement, sharing cigarettes and herb. Our last Teen Feed is next month on Halloween.

This morning the men are grinding and sawing and hammering out back. I don't know where Hugo was but evidence of him through the house is characterized by dirty footprints and fine grit and various plant burrs.

The person I'm not dating leaves for the Sudan on Saturday. I bought her a wee external hard drive and loaded it with movies and series so she can watch Sherlock on her computer. I'm worried about her. Nine months is a long time. Especially in a place where there is civil war. I treated her to dinner downtown. Coconut cream pie for dessert. Least I could do.

All my staff is at a birth and I am doing clinic by myself. It's ok, not too busy.

Florence. The Duomo was astonishing. It looks fake, too big and green and white marble, acres of it. Look at the size of the people. Without power tools too. 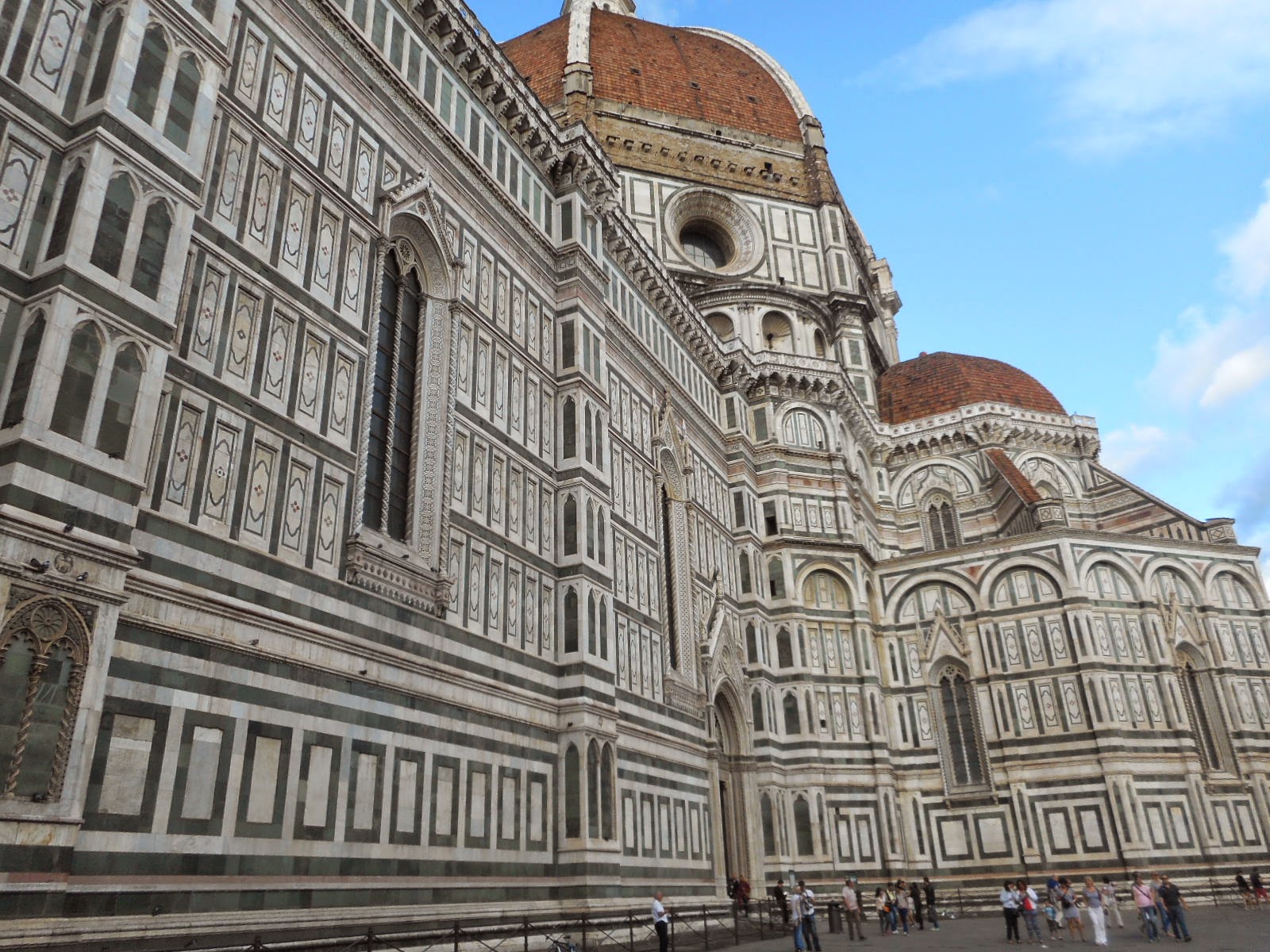 Italian women reminded me of Manhattan women, all gorgeous and floating on air in their high couture and heels. No gorgeous Italian men. I looked. And no pregnant women. One woman nursing a baby in a pew. And this lady. 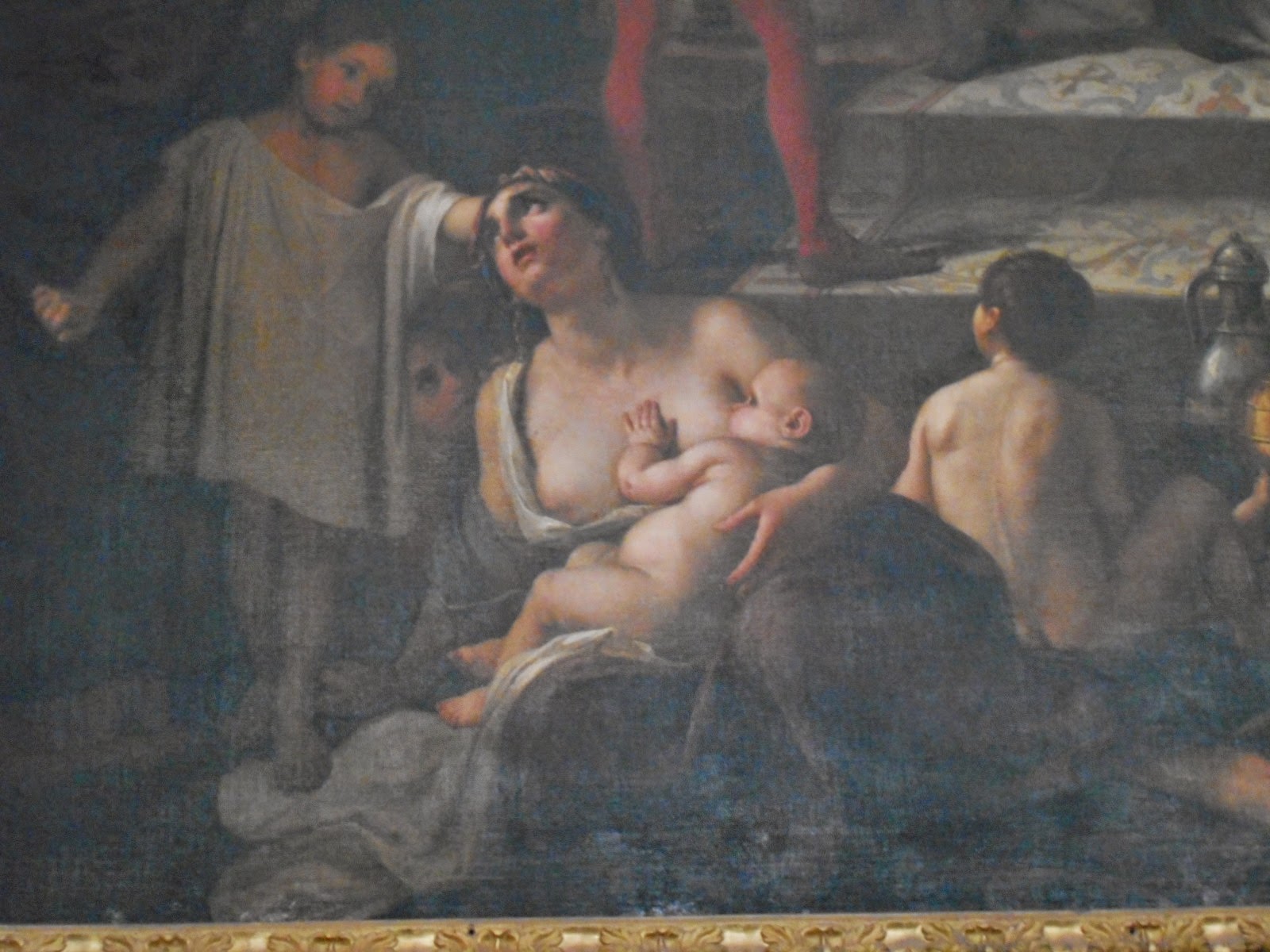 I long for Italy. Languorous meals that lasted for four hours. The best tiramisu I have ever eaten. Beautiful small farms of olive trees and grapes. The slower pace. I feel homesick.

The person I'm not dating is leaving for the Sudan this week. We had dinner together last night, a farewell dinner. She's been fixing up the houseboat she lives on. We might try to see each other one more time before she goes. For nine months. I feel vaguely worried about her.

I climbed down the ladder today into the basement to get my laundry. In my pajamas. My neighbors don't care and they can't see me anyway.

And I stepped on the scale this morning. Um, pasta and I are in love but I'm afraid I have to break up with her. Anyway, there ain't no Italian pasta around so I'm probably safe.

My house is a disaster. The back is gone (hurrah) and there is cement dust everywhere and giant piles of wood and bits of wood and old siding and what all. Wires hanging down. This is all good. My dance retreat starts today and goes all weekend. The katz have fleas and I must get some flea stuff for them. A house guest is arriving and I have to vacuum the couch so she'll have a place to sleep (and hopefully she won't get covered with flea bites).

The foundation guys are outside as we speak, talking in loud male voices about concrete things. I will soon have a new set of stairs to the basement, the cavern they dug will be filled in and they will be gone. Jim and Rob, the two bearded grey haired, balding men with glasses (BGBG) will arrive to continue pondering and ripping off siding and hammering wood and uncovering 'irregularities' in the old house (hahahahahahahahaha). Apparently, I need a tiny 'ramp' into the addition because there is a 2 inch discrepancy between the floors, compliments of the do-it-yourselfers who proceeded me.

The dog has a baleful look on his face because he needs/wants/must have a walk and I'm still in my pajamas. 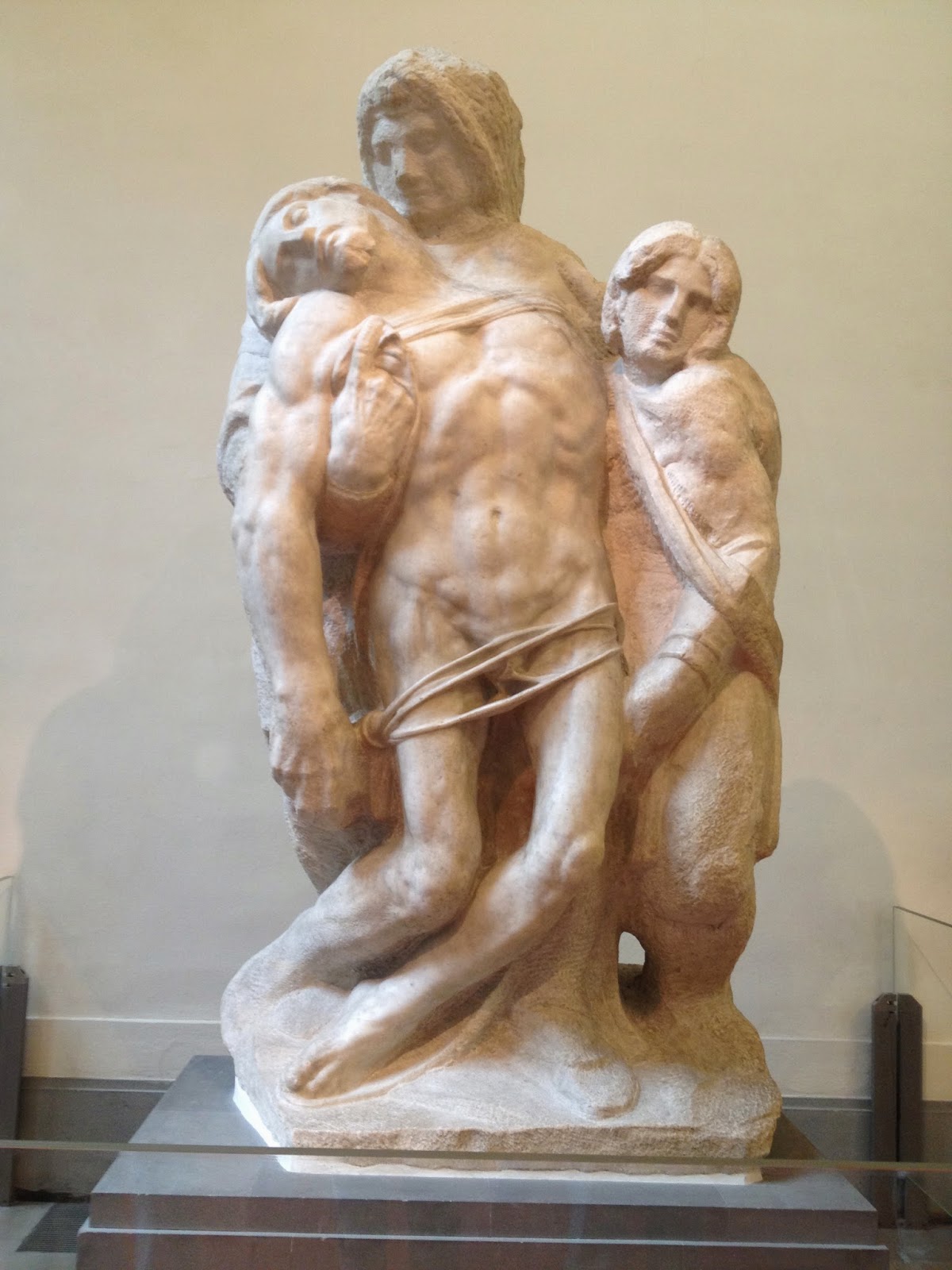 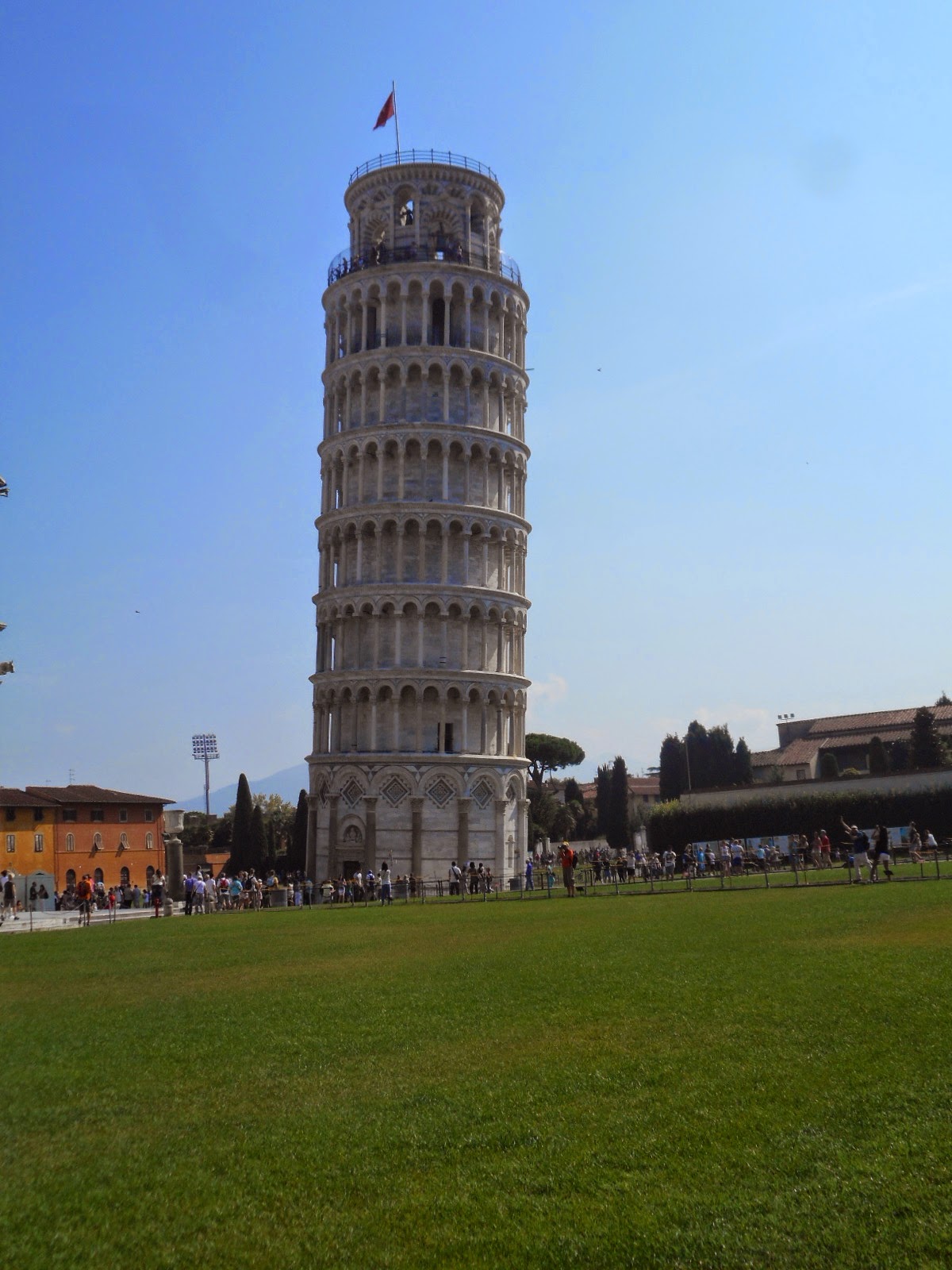 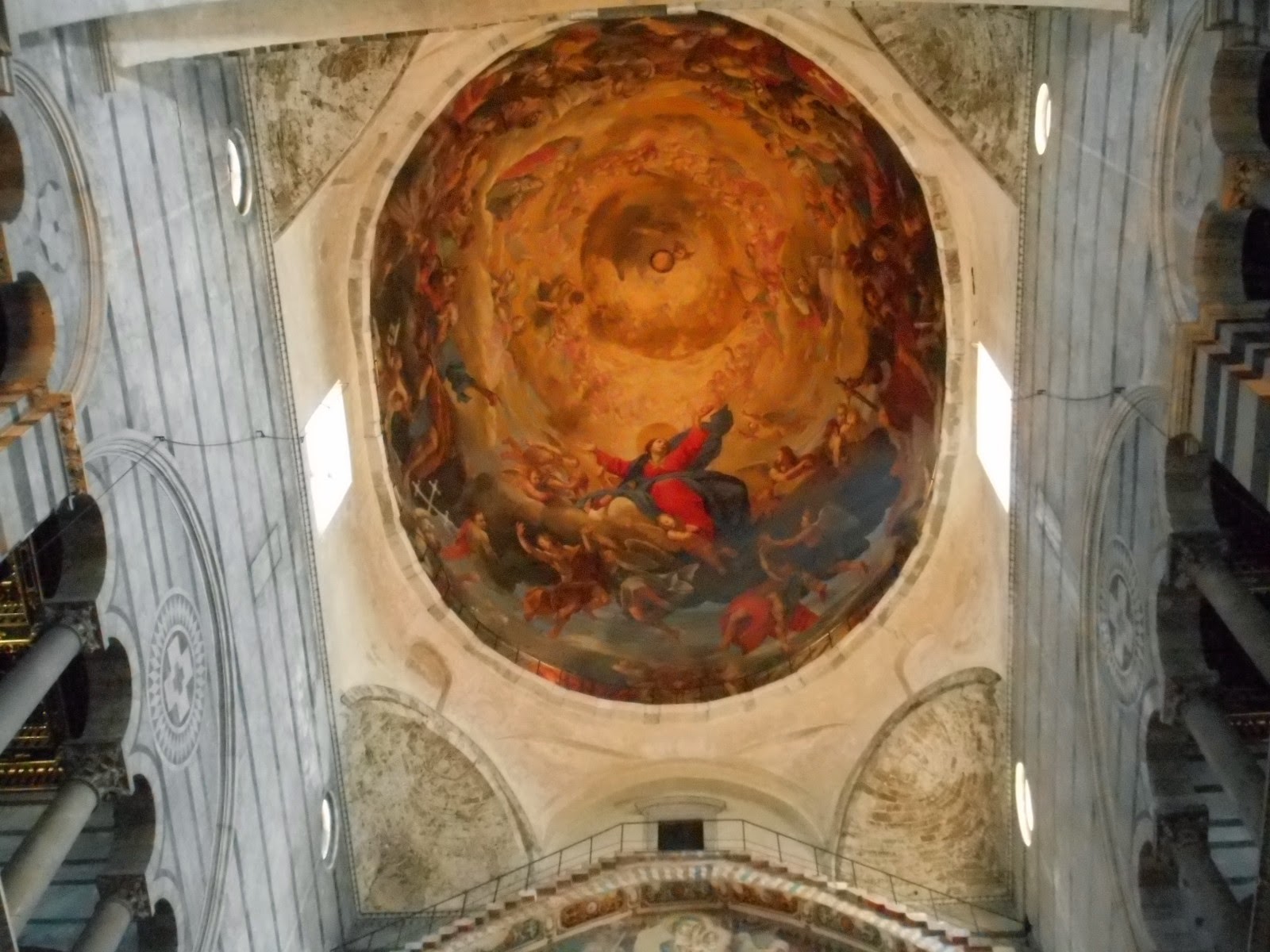 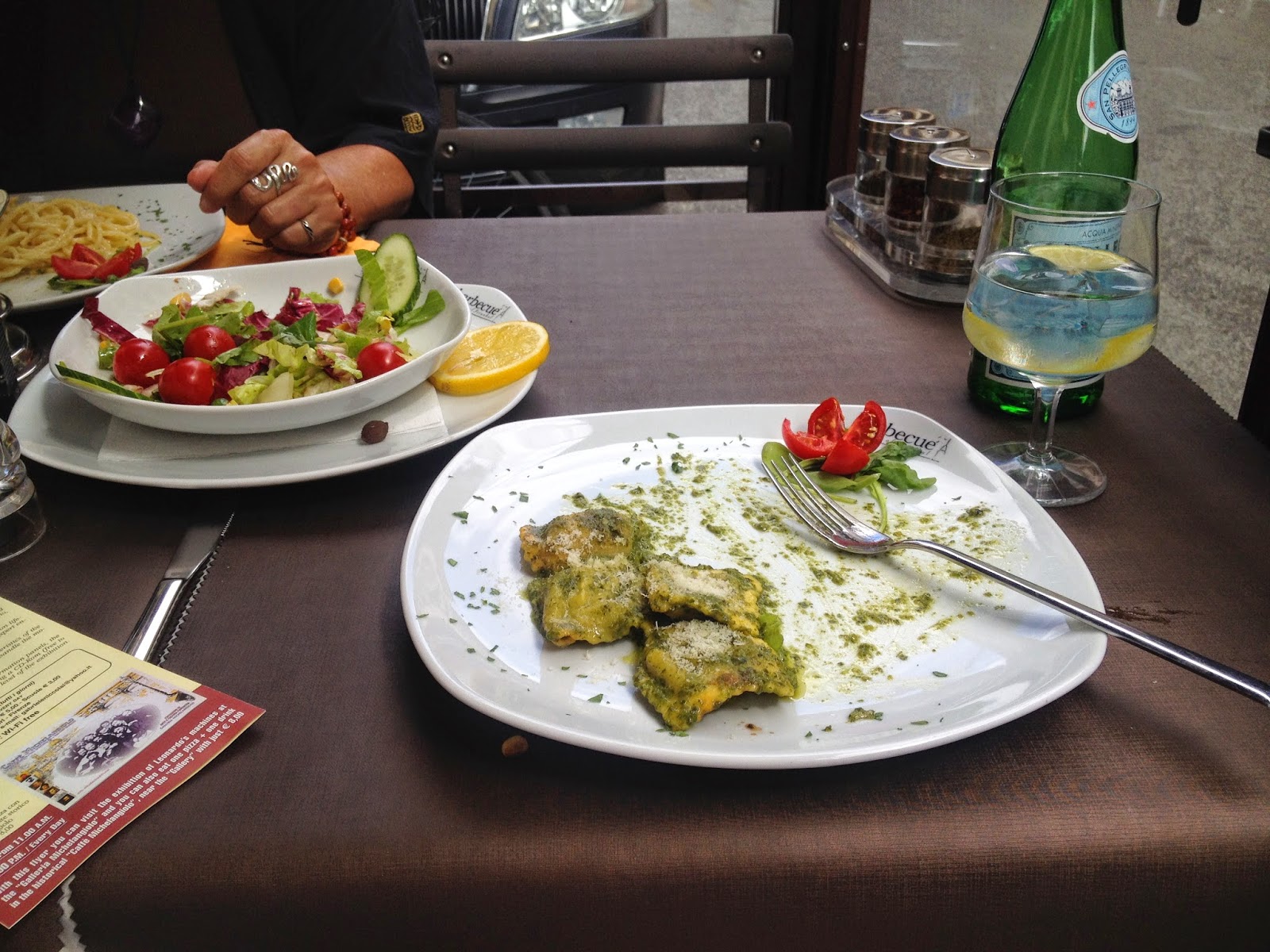 Italy is better than they say. 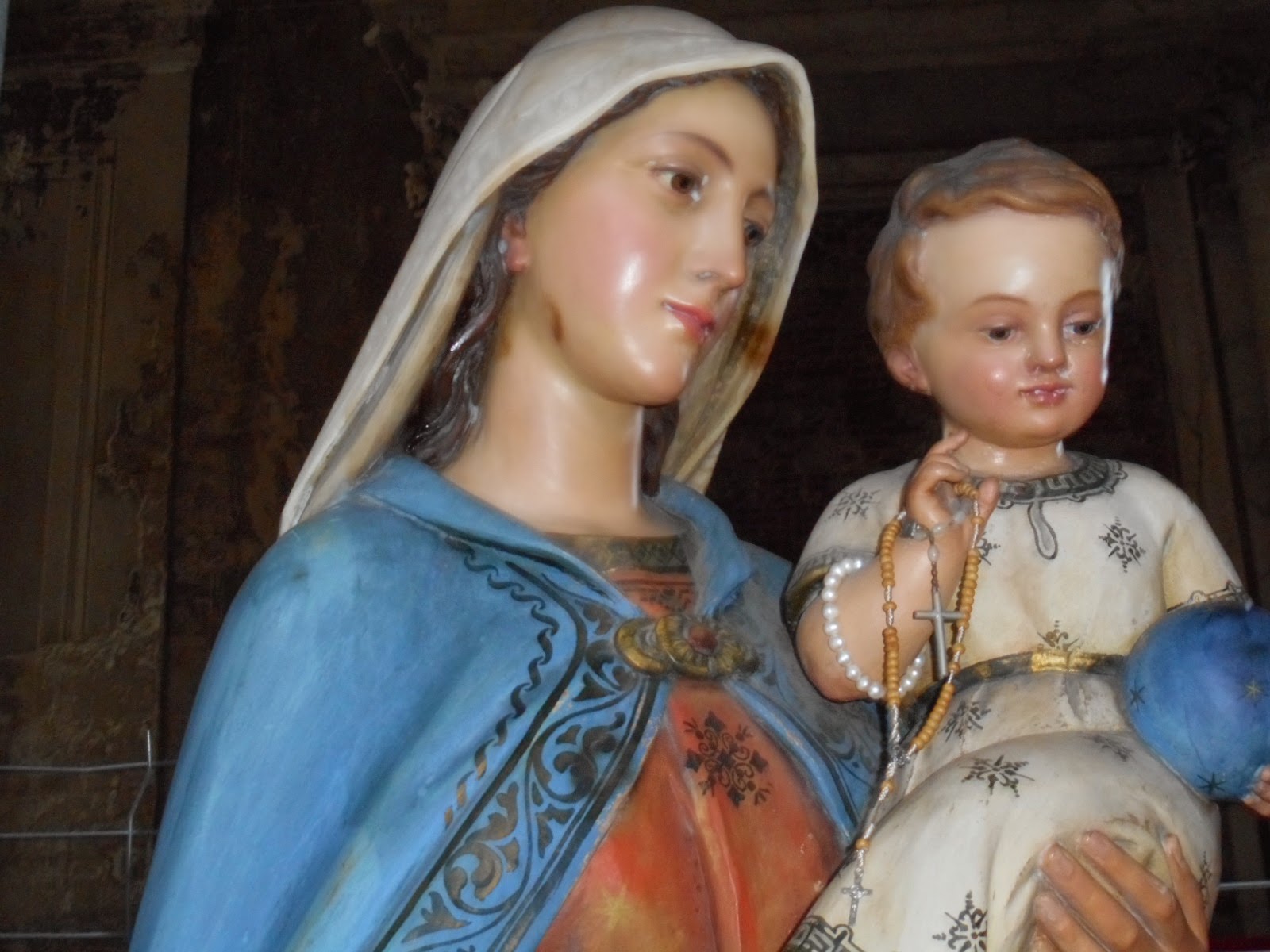