are annual fun for me. Because this month has sucked in such a big way, I forced myself to go to the Handel's Messiah sing-a-long as I usually do. You know, no rehearsals, volunteer orchestra and the Unitarian Church provides MOUNTAINS of cookies and hot cider. I sing all the parts, well not the soprano. It is too high. The bass is kinda low at times. I pretty much poisoned myself with a wide selection of cookies (and I ate a few grapes, 2 to be exact so I could feel like I have eaten fruit today) during the intermissions.

Tomorrow I go to a retreat at the Great Vow Zen Monastery with Holly. We are staying there until New Years. Fortunately we are not adhering to their schedule. I looked it up. They get up at 3:50 AM to sit, oh my gawd, and they go all day until 10 PM or such. Those Zen people, yikes. We are going to be singing and dancing and writing and doing theater. I'm not sure about the theater part. I feel so unstrung and wobbly, I might start throwing up or something. I think you can die from grief. I don't intend to do such a thing, however.

Holly's birthday is tomorrow and we are going to make her a cake with frosting. I think we should put sprinkles on it and wear paper hats.
Posted by beth coyote at 11:51 PM 2 comments:

I figured it out

· Inner ring: The violent against God (blasphemers), the violent against nature (sodomites), and the violent against art (usurers), all reside in a desert of flaming sand with fiery flakes raining from the sky. The blasphemers lie on the sand, the usurers sit, and the sodomites wander about in groups. Dante converses with two Florentine sodomites from different groups: Brunetto Latini, a poet; and Iacopo Rusticucci, a politician. (Cantos XIV through XVI) Those punished here for usury include Florentines Catello di Rosso Gianfigliazzi, Ciappo Ubriachi, and Giovanni di Buiamonte, and Paduans Reginaldo degli Scrovegni and Vitaliano di Iacopo Vitaliani.

So there you have it. Art violence, and we witnessed. They stuck a knife in art and killed it. We barely escaped with our lives. Whew.

Posted by beth coyote at 4:04 PM No comments:

beware. Tonight Dana Guthrie Martin and I went to a reading in my neighborhood. It was a kind of poetry hell, some featured readers and an open mic. Sounds tame, you think. Not so. Cody Walker was a featured reader and he was entertaining and thankfully, not full of himself. But the open mic, lord help us. Especially the lady who basically was preaching about Jesus saving us in a poem that went on for FOUR pages. I thought I might have to pass out and cause a commotion so she would stop. And then Dana, bless her, got up and read a poem about Jesus encountering a condom, reservoir tip and all. I was afraid we might spontaneously combust from the blasphemy. It was SOOO wonderful. Other readers felt compelled to read about thankfulness and praying because of the season. I just wanted to garrote them. I'm not in the mood right now for smarmy holiday remarks. Actually, I can't go to a reading ever again unless my friends are reading. At least I know they will be bearable.

Oh, the best part. Dana and I were reduced to passing notes. One of the other 'featured' readers read interminable confusing poems and every time I sneaked a look at Dana, she had that glazed look in her eye and a bright little smile on her face. Then he tried talking to her and he asked her out for coffee. Ha! She replied, " No, I don't think I can do that." It was a brilliant moment of evening theater.

I'm not sure Dana will ever accompany me again. And I can't say I blame her. It's the type of evening that gives poetry a bad name.
Posted by beth coyote at 11:30 PM 2 comments: 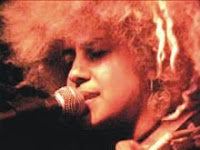 are so important. I remember when I was breaking up with my first husband and it was LA and I stayed up all night and at 3AM Sunset Boulevard came on and it was wonderful with Gloria Swanson and a dead guy floating in the pool. I totally forgot my whole life was messed up at 20. Movies are the panacea for so many things. Today my friend and I went to see Juno, an indie film and it was fantastic, funny and about pregnancies and how wrong they are sometimes in the right way but the music was written by SOMEONE I KNOW, Kimya Dawson. So great to hear songs I know in a movie. And so great for her to be famous. The script is by Diablo Cody, pure genius.

It took my mind off suicides and Yogi for 2 hours.

Last night I went to a suicide support group, kinda like AA but different. I felt normal there. I cried so much there was snot on my shirt and nobody minded. I told them everything and they didn't freak out or anything. It was such a relief.

My cat Lola has been on my desk in a serious way. There are cat prints on everything and the papers are rearranged. I think she is trying to steal my ideas. Except that she isn't very smart.
Or as they say in Juno, she's not the brightest bulb in the tanning bed.

Only 12 more days until this month is over. Nothing else bad can happen. I mean it.
Posted by beth coyote at 8:09 PM No comments:

It's hard to take this personally so I'm going to try not to. My beloved dog, Yogi, is dying by degrees and I'm taking him to the vet tomorrow for the last time (euphemism-put down, put to sleep, etc). Shit. I just want something to lighten up already.

So a few years ago, I was having a very bad day so I put on Beethoven's 9th, very loud, got some cigarettes and some Scotch and lay on the floor in the living room with the windows open in October. It was cold, it was loud, it was pretty much of a drunken misery moment. Yogi came in, took in the whole scene, and left. I disgusted even my dog, old loyal friend. And HE had attitude with ME, the nerve, when I have seen him eat duck poop and roll in dead salmon.

God, I'm going to miss him.

For New Years I'm going to make some burnt offerings or something. What do you burn in those things anyway? Clothes that don't fit? Old love letters you were excited to get 25 years ago and upon recent viewing are rather stupid and lame? Boxes of horrid poetry you wrote in high school?

For my birthday next year, I'm going to have a Bad Poetry party. Everyone has to bring a bad poem, preferably one they wrote in college. Lois treated us to a poem about walking along the shore and thinking deep thoughts. Profoundly bad.
Posted by beth coyote at 1:16 PM 4 comments:

my writer friends and I read at (untitled) Intersections and we were brilliant. Rebecca Loudon, our mentor and guiding light, introduced us and she said kind and flattering things. We are from her two writing groups, The Foundry and The Wallingford Irregulars. I did not know but she has hosted writers since 1998. She began hosting writers as an experiment, to see what could happen in a non academic setting. Because she is an excellent poet and teacher, we flourish. Really. I was so happy to hear Martha's poem, Indigo, again. And she was angelic in pink. AND she had practically memorized her poems. Cripes. Rebecca has suggested that we memorize a favorite poem so I chose a Jorie Graham poem that's about 4 pages long. What was I thinking?


I bought shoes yesterday, with spirals on them. If there was a perfume called 'shoe leather', I would wear it. Kinda like 'new car smell' for guys. I HATE the whole shopping thing, especially right now, except for shoes. Then I can have a Fran's chocolate, the kind with salt on them.

Did I say how much this time of year makes me SHUDDER. The relentless christmas songs in all the stores, the towering piles of crap for us to consume. I even went to a toy store for Milo, who is 5. Holy mother of god, plastic, as far as the eye can see. So I got him 2 superhero dolls, they look like androids on steroids but they have capes, a very important fashion accessory when you are a 5 year old boy, apparently.

I admit it, I slept next to my new shoes. I can see them from the bed. They are on a little platform, like an altar. So maybe they are my version of superman in blue tights and a cape. So put me in jail.
Posted by beth coyote at 9:34 AM 3 comments:

when someone in your family commits suicide, you can stay in bed all day with the cat and call the crisis line for the suicide group. The person on the phone has to make sure you are ok, you aren't also suicidal too so they ask questions about your friends (yes, I have some), are you sleeping (no, of course not) and they tell you they are sorry. Then you call for an appointment with a therapist and they ask the same questions except they don't say they are sorry. They want to know if you need an emergency appointment. Wow. It is all so banal.

I feel like a pariah, being stalked by the suicide gene.

I read with my writer friends this Friday. Not suicide poems. Sylvia Plath did a damn fine job with Ariel.
Posted by beth coyote at 11:26 AM 1 comment:

where Annie and I stayed. We drove a lot. We talked a lot. We looked at a lot of pictures of my brother and his friends, mostly drinking. The weather mostly sucked. We went to a brewpub for dinner, the waitress spilled drinks all over me, and there were no vegetables on the menu. At all. People in PA smoke and eat fried food and iceberg lettuce. Between Scranton and Allentown, there was a billboard with a picture of the Dalai Lama on it. It felt like my friends put it there so we would see it. He was smiling with his big ole glasses on. I love him and he loves me back. I don't think he would ever kill himself.
Posted by beth coyote at 8:49 PM 2 comments: