While at the pool today, I hopped into the water just before the swimmer in the other lane got to the wall. Thinking that she was swimming slowly, I'd have time to get ahead of her (always a jostle in the pool with multiple swimmers in a lane). Well, she zoomed by me in the water in time to yell at me at the other end of the lane. I was 'very rude', cutting in front of her. I apologized profusely but she harrumphed off. So I spend the next 20 minutes feeling like a shithead, I mean, how could I be so thoughtless etc. I waited to be sure she'd be gone from the locker room and I got into the hot tub when my fav life guard came over and told me he saw everything. I did nothing wrong. He almost spoke to her but didn't want to rile things up.

Whew! Tempest in a teapot!

I think we don't know how to be around people anymore. I surely don't. My feelings are so easily hurt. As my parents always said, I'm too sensitive (whatever that means).

Anyway, spring here is cold, wet and beautiful. I've planted a tree peony and more azaleas. The apple trees are covered with blossoms and the dogwood is blooming too. I saw one of the cold water swimmers at the pool and she swims year round. She says the water is getting close to being 50 degrees. People, that's too effing cold. 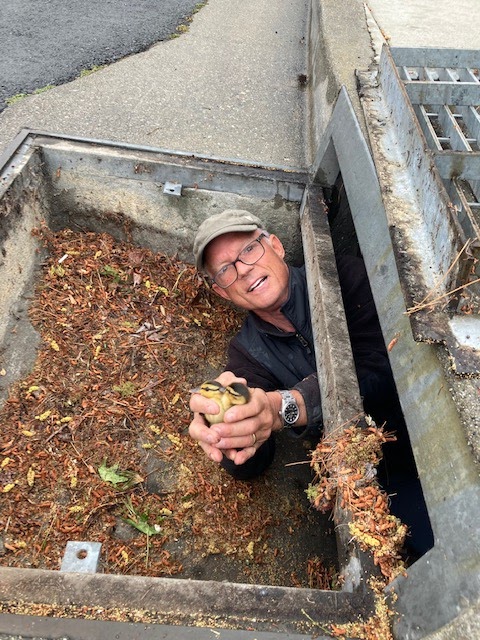 My brother rescuing ducklings from a storm drain in Peasant Hills California. He says the mother duck was walking round and round with her 2 babies and when he looked in, there were about 10 ducklings trapped. He moved the grate and plucked them out. My brother the hero. Our father would have done the same thing.

Haven't seen any babies yet at the lake but two of my three birdhouses have tenants. Chickadees.

Love to you all.

Today is my death day. One year ago, I started a One Year To Live study and here we are. Next week we are born again. This morning I opened this message from my older daughter and sat crying in the food co-op.

I’m so glad you will be reborn today xoxoxo

Give what’s left of me away

And old men that wait to die.

And if you need to cry,

Cry for your brother

Walking the street beside you.

And when you need me,

What you need to give to me.

I want to leave you something,

In the people I’ve known

And if you cannot give me away,

At least let me live on in your eyes

And not your mind.

You can love me most

And by letting go

That need to be free.

So, when all that’s left of me

Still unseasonably cold here but the flowers persist. I haven't seen any hummingbirds at all. Wonder where they are.

Going to work in the greenbelt this morning. We'll be clearing blackberries and ivy. There's a downed tree over the trail, don't know how that will be resolved. There's an abandoned (I think) homeless encampment too so that will be an issue. I walk through the greenbelt all the time so it's time to give back.

Been very busy with clinic. One of the midwives got sick so I stepped in, went to a birth, have done a bunch of home visits and worked an extra day of clinic. It's fun to be with my clinic 'family.' I don't know any other folks who are so funny and cynical and caring, all at the same time. I am reminded that I spend so much time in silence, being in a noisy clinic full of yelling kids  and pregnant women is quite an adjustment. I'm also reminded that the midwives and the office manager are my friends. I care about them and their lives.

The kaffer lily is blooming, always does around Easter time. As I write this, I looked up the definition of 'kaffir' and found that it is an 'extremely offensive word for a Black South African.' Great. Well, let's give it a new name, k? Any suggestions? 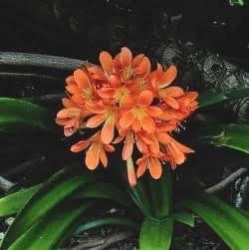 It has a nice fragrance. BTW, I've had this plant since 1976. Got it as a wedding present.

It snowed (!), then hailed and rained and then the sun came out. The garden is gorgeous right now. 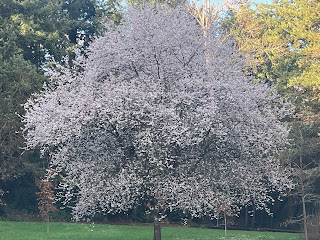 And this is just one tree flouncing her flounces.
Waiting on mothers at the brink of labor. Tomorrow Clark and I will eat delicious food, wear blue hats and watch Moonstruck with Cher and Nicholas Cage. It's pretty much a perfect movie. Because 1) Cher and 2) demented Nicholas. And NYC and the script and accents and the whole thing.
It always helps to walk around in my neighborhood. There's the vicious doberman where we cross the street so he and Felix don't have a snarling dog argument. There's the fish market with crabs piled on top of each other in tanks. As much as I love crab, I just can't seem to eat them anymore. There's the neighbor with the wild assortment of ceramic elves, frogs, sheep, the baby Jeezus etc. as a tableaux. There's the woman with the beautiful garden and the view of the lake.
I was thinking about Elizabeth's Sophie today. I met her in LA. The famous Sophie. She radiates love. I don't know how to explain it. She is present in ways most of us aren't.
The chickadees and juncos are feasting on the seed I spread out for them just now. I haven't seen the hummingbirds lately. Maybe they're tending to their families.
I just finished a book called The Chimpanzee Whisperer: A Life of Love and Loss, Compassion and Conservation. It's about a Hutu man from Burundi who survived the war and found himself caring for chimps in protected reserves in spite of his third grade education. Because of his great heart and kindness towards the primates most closely linked to homo sapiens he has traveled the world and spoken at the UN and met (of course) Jane Goodall. Oh, and he has bunch of kids, both his and adopted. He is everything Putin and Bezos and half the congress are not. He's a mensch. A good person.
The thing is, when the Dalai Lama meets anyone and I mean anyone, he treats them as his friend. I'm just not there.
The last retreat I attended was a deep dive. There were over 200 people on the retreat. I like to think there are many of us who are doing their best to be ethical and kind and generous. Every one of us counts.

Two things happened today that made me cry.

1.  The first Black woman was confirmed to the Supreme Court.

Both are occasions for radiant joy,

On another retreat. With

He's German, multiple PhDs, many books, many languages including Chinese and Pali. His books are dense and in person he's funny, kind and wise. I'm enjoying spending time with him and the class of 200+ people on Zoom.

Spring is well and truly here. The magnolia tree down the street is ridiculously gorgeous. Massive. Covered with flowers. Tiny lettuce and spinach greens poking up through the dirt.

Much love and kindness radiating all around, dear ones.