Maya in San Rafael texted that they're in the dark. She's got cat carriers, water, flashlights, extra clothes, food and a  small generator in her car. School is closed. She can't go to work because the doors are opened by a combination lock. They can light their stove but all the gas pumps are dark.

Eden in LA is ok. Haven't heard from my brother.

And here in the NW it looks like this: 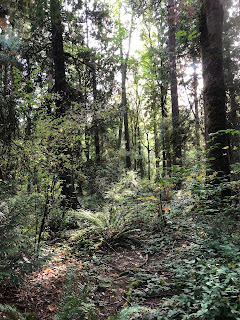 Got nothing to say about  current events. Oil has contributed to global warming which causes the droughts and crazy weather patterns and hence fires and destruction.

This child spoke truth to power.

My friend Micha figured out how much fossil fuel it took to fly her to Greece and back. She was appalled. She wants to make art that doesn't include electronics because of components made with harmful chemicals and minerals. I suggested rocks and fallen trees and leaves. Stonehenge has lasted for a while and doesn't pollute, as far as I know.

California is burning and al Baghdadi is dead

where is uncle to slap him
teach him to take life, any life
is not honorable
no matter how necessary it may seem

as she texted me-
“We're here in the dark,
waiting for the apocalypse.”

Felix has been groomed within an inch of his life. He has the pouffy tail and ears of a 'real' poodle. He doesn't seem to mind however. Dogs are very unselfconscious.

I hung a very large painting I did on the wall of the living room. I sincerely hope it doesn't fall down and scare the bejeezus out of me and the animals.

It's dark and rainy and cold here. The leaves are glorious.

I wonder how much more life I have. Rep Elijah Cummings was only 68, why a young man! And such a splendid man he was. I/we will miss him so much.

I tried to eliminate some ground wasps that are swarming by my front door. I felt so guilty. But they're still there. ***sigh***.

Craig is a man in my tai chi group. His form is beautiful, as is he. I told him I admired his form (meanwhile I stumble through the moves) and now he is (I think) flirting with me. Oh dear. I haven't had to tell a man I don't roll that way for years. He made one kinda homophobic comment and I didn't correct him... Anyway, I have no skills anymore. Not for flirting or deflecting flirting. It's a nice thing about being, er, older. He IS attractive. I did say I admired his form (and his hands and long legs). Oh dear. This shall amount to nothing, children.

I find it a bit annoying when friends lament my singledom. It's really ok, honest. Sure, I talk to myself. I can be a bit dotty. But I'm fine. I consult myself when I want to do things. And usually I am quite reasonable.

I love this season of cold and dark. Always have.

May all beings be warm and safe.
Posted by beth coyote at 6:10 PM 3 comments:

Trader Joe's is fecking evil. There is chocolate and sweet stuff ALL OVER THE STORE, not in just one area. It's everywhere, lurking when you least expect it.

Ok, I have poor impulse control. And I bought some peanut butter cups. And they are delicious.

At least my women were here tonight to meditate so I gave them some. But I ate way too many. Way, Too. Many.

Felix got a bath yesterday because they groomer was sick. I trapped him in the bathroom, got a  stool to put in the shower, took the shower head off the hook and washed the sad dog. He sat in the dining room, shivering. It wasn't THAT cold.  Anyway, as soon as I said the magic word (walk/hike/outside), he leapt into the air, all troubles forgotten.

The momma I was waiting on had a c/section. Unfortunately. I go see her tomorrow. Her kiddo is lovely. Too many surgeries to have babies. Not right. But in her case, necessary.

PS. Renee Zellweger is pretty darn good in "Judy". Just be ready for a tragic story.
Posted by beth coyote at 8:33 PM 2 comments:

Waiting on a momma who called with ruptured membranes this morning. Waiting for the window cleaner person to arrive. What to do with the dog? Don't have an answer for that one right now. Felix is a shaggy, dirty mess and he has a date with the groomer tomorrow. Thank the lawd.

Amy is the name of the window person. She has been here once before and I will do better this time. She ( I think she prefers the pronoun she) arrived in a house dress (is that even a thing anymore?), a scarf on her head and a deep voice. Uh, I was not skillful, called her 'sir' a few times. Nope, don't think she is a sir but maybe she/he is a cross dresser and not trans but how to ask????

My friend Micha would just encourage me to ask her. Micha is a trans woman, or as she says, 'I'm just a WOMAN.' She is now happily in a lesbian relationship with someone who matches her in wisdom, smarts and wonderfulness. Did I say she's a professor at UCSC with a double PhD in gaming, virtual reality and computer programming? And she's an artist with an international following. She's wicked smart. And I love her. She has introduced me as her mother, so there's that. I'm so proud.

In spite of the hatred we don't have to sink down.

I am enjoying the impeachment brouhaha much more than is seemly. Arrests! Nonsensical pronouncements from the VP! Giuliani! etc.

The cold has arrived. And I have solar panels which will provide free heat, yay!!! Maybe this winter I won't be huddled up in a blanket in front of the fireplace with the cat around my neck.

Happy to be going to a birth. Haven't been to a birth for many months... It's like riding a bike. You never forget how. And this momma was at her friend's birth a few years ago. I was the midwife so she remembered me  and came into care with us. May the circle be unbroken..
Posted by beth coyote at 10:05 AM 5 comments:

Hear me out. Last Sunday I attended a Christian church service. They are graciously hosting my Buddhist sit and a Buddhist recovery meeting, all without cost (or very little cost). The church is beautiful, large windows, raised beds of flowers and veggies outside, a new mom pastor who led the service with a baby on her hip.

It's a small congregation, mostly older folks, a few younger people. They are politically active and their message is love your neighbor. I went because they were cleaning up the grounds around the church and on the street, including the parking circle. All were looking rather neglected. And I wanted to help out, to give back.

So I went to the service. I had a visceral reaction sitting there among the God talk and the Bible verses and the singing. It wasn't aversion exactly. It was more like a feeling of wrongness, like I shouldn't be there as an unbeliever. I definitely didn't take communion.

What's so different about my Buddhist practice from theirs. They have formed a family of sorts as I have with my Buddhist friends. They have stories that they read which are fantastical, I know they are metaphors but some folks believe them, especially kids. And there are Buddhist stories that are just as unrealistic.

So it comes down to the idea that we're sinners and we call on something outside ourselves to be cleansed which I just can't buy. Our original self is the world, we just have forgotten that we're part of everything and everyone. And we ARE that already. We don't need an intermediary to fix us or remove our sins or whatever.

I mean. They're good Christians. They pray for one another. They try to do good works in the world. They're not filled with hate. They're accepting of difference. They're the faith of my ancestors.

Cultural appropriation? Am I guilty of this? I don't know.
Posted by beth coyote at 8:54 PM 7 comments: