When I lived in San Francisco in the Castro district with my girls, we had mice. They were in the cupboards and closets. I used a glue trap once and was horrified. I would trap them under a cup and take them into the bathroom where I would put them in the tub and scoop them into a jar and walk them some distance away from the house and let them go.

I was on the phone one day and a mouse came out from under the sink and was ambling across the floor. Without thinking, I stood up and walked over to the mouse and stepped on it. So shocked by what I had done, I hung up and knelt down to the floor. The mouse was still alive and I don't remember how I dispatched it. Me, a person who nursed baby birds and worms and beetles and crickets, had callously killed a small creature who was just minding their own business.

This past Thursday, a vet came to the house and euthanized Lola, the black kitty I've had since the early 2000's. I was working for Fred Hutch at the time, conducting interviews in women's homes. This house was near mine and as I walked up to the front door, a small black face appeared from under the steps. A child answered the door and explained that they had an indoor cat and an outdoor cat. I asked the mother if she had plans to adopt the cat out and she said she would be happy to stop stop caring for the porch kitty. I went home and came back later and brought Lola home. I had two other cats and there were dust-ups and scraps but eventually peace was restored. Those other cats disappeared, as cats will when they live outside. Lola remained and I decided after too many bird murders, to keep her inside. She has been my companion for so many years. Especially after the pandemic locked us all inside, she was on my lap, by my shoulder, sleeping on my hip when I was in bed. I have swept up mountains of her long black fur. A talker, she meowed a lot, and I mean a lot. As she aged, she threw up more, I cleaned her litter more often, symptoms that she was getting sick. On Monday the vet told me she had a tumor the size of a fist and she probably didn't have a lot more time. 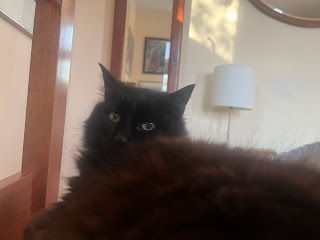 I've been crying all week, huge, shaking crying. Clark came over yesterday and helped me bury her in the garden. Felix keeps wanting to go outside. I think he is looking for her while I wander around the house, not eating or sleeping, blowing my nose and weeping.

The air is so smoky today, not possible to go for a walk. Otherwise I'd go to Cougar Mountain and hike with the boy. Maybe a swim in the pool and a quick run for Felix.

This is a bit long winded, I know. But grief is such a powerful force. I feel literally bent over with the pain. A friend just texted that her beloved husband has had a stroke. Jeezus.

For chaplaincy, I am to make a personal ancestor panel: 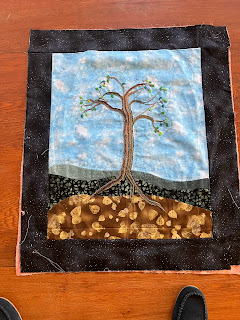 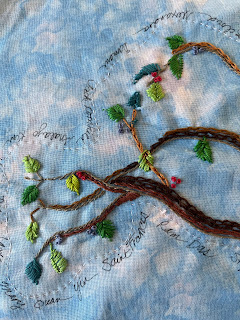 I've written many names of all who have influenced and guided my life: my father, Quan Yin and Ram Dass,  Lola and Yogi, so many more.

I part the out thrusting branches

and come in beneath

the blessed and blessing trees

though I am silent

there is singing around me

though I am dark

there is vision around me

though I am heavy

there is flight around me