Right now I'm in the Cascade/Sisikiyou National forest in Oregon. with dear friends Traci and Brian and their kids Hazel and Hucksley (my midwife babies) Traci is an old friend of Maya's from junior high. We were all headed to Manton Cal for our annual time at the lodge where there's a pond and a fabulous house with all the things. We eat, swim, play games and hang out.

Fire season is upon us and if we're not in immanent danger, there is smoke. Lots of smoke. I was headed for Manton on day two with Felix after an interesting night in a Motel 6 (egad) and was driving by Ashland where I knew Traci and all were camping. I hesitated and then thought I'd stop in to say hi. And I stayed the night, unprepared for camping. I squeezed into their tent and swam in the hot springs pool.

Because Manton was getting smoked out.

So we last minute got an airbnb near to Ashland and took a hair raising drive up to this nice cabin way the fuck up the side a some mountain with a long lake (except the lake has dried up).

This morning I woke early and went outside. Smoke. Shit.

So I got the other adults up and we decided after much internet searching to stay for today. The air has cleared out and the sun is shining so we're gonna stay. Maya is coming here.

For now, we're putting together the annual jigsaw (this year it's two chihuahuas humping, I shit you not). I didn't choose it, honest. We're gonna go for a hike, the dog has had his morning ball throwing session and blessedly, we're all together. There are lots of deer and fledgling robins in the rafters over the porch. It's very quiet. Very quiet.

Fires all around us. All up and down the West coast.

We must be kind. We must be activists for global warming. As you all know.

May all of us be safe and protected.

SUMMER OF SOUL you must see

It's currently 61 degrees in Seattle  with overcast skies. After prevaricating for a month, I've decided to risk it and travel down to Manton, Cal on Thursday. It's very hot there and very dry. Felix will accompany me. I'll either camp out somewhere or get a cheap hotel room that accepts dogs on the way down and back.

Rolling anxiety with increased infections, wildfires and all.

Jeff Bezos took an 11 minute spaceship ride. WTF. I just saw the doc "Summer of Soul", terrific film with archival footage from the "Black" Woodstock. It's a series of concerts held in Harlem in the summer of '69 with an astonishing line-up of musicians. Stevie Wonder (age 19!), The Staple Singers, Gladys Knight and the Pips, Sly and the Family Stone, Nina Simone !!!!!!! The moon walk happened that year and there were interviews with Black folks. Of course, they questioned why money spent on space exploration wasn't being spend to house and feed people. Well yeah.

But here we are, reaping the results of our collective greed and grasping.

In other news, Deanna and I have decided to demolish the strawberry bed and feed the soil and start over. Strawberries give it up after about 3 years so we will start over. We do love strawberries. The blackberries are ripening here. I still have jam from last year and I don't know if I will make jam this year. I might just pick and eat and wait for Deanna's plums so I can make plum jam instead.

Judith and I braved REI yesterday for freeze-dried dinners for our trip to the Boundary Waters in August. It's a canoe trip for five days. I have most of the stuff I need from previous backpacking trips. The outfitters are supplying the food and after reading the menu, I realized I'd have to bring my own food. After this year of intestinal drama, I need to avoid pretty much everything listed.  There are no veggies but a lot of meat and pudding. Oh dear. I don't mean to be a food snob but...I am.

Be safe and well, dear friends. Wherever you live on this suffering planet, perhaps offer gratitude for all the living beings we coexist with. 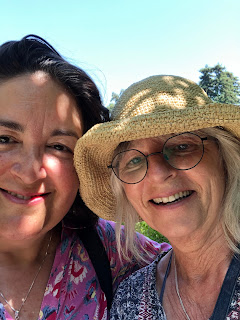 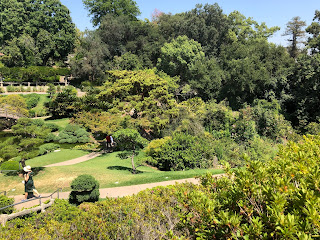 Elizabeth took me to Huntington Gardens, a gorgeous big park in Pasadena. Mostly swooned over the Chinese and Japanese gardens, especially the bonsai.

And we hung out and talked. But mostly just being with a person I have known and loved for years, all virtual was so remarkable. Like the first time I hugged someone during the pandemic.

I want a piece of Rebecca's apple pie. Pie heals. Pass it on. 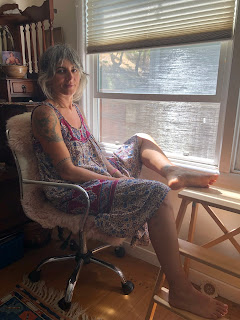 This is Maya, my beautiful angelic older daughter. She has a reservoir of calm and peace and equanimity that helps all in her orbit. I have loved her before she was born. When I think of her, I remember my hand on my belly as she rolled around inside me. How mysterious that was. How magical. Because the hospital back then whisked babies away from mothers, I didn't hold her for 10 hours. And I didn't see her naked until we got home. When we did, I undressed her completely and laid her body against mine. I had to own her, smell her, feel her. Like the mare licking her newborn foal, I had to be an animal and declare, "This is mine, I made this, I own this." And I did. I made the heart vow to protect her and care for her. Forever.

She moves with grace and beauty in this world.

That there is a photo of Felix in our woods before the terrible heat wave that struck the PNB such a terrible blow. It's warmer in Seattle than LA where I am right now. Eden is doing so much better, still dizzy from the concussion but cranky and funny and adorable.

I met Elizabeth! We've been blog friends for, she says, 10 years and she is as splendid as you would expect. She took me to an enormous park, Huntington Park, with a Japanese Garden and a Chinese garden and bonsai garden and a corpse flower that was about to open. It was so beautiful. I have been staying in an area of LA full of 'old money' homes with the most extraordinary gardens. In the midst of a horrible drought, people have green lawns and lush flowers. E said that all the pick up trucks we were seeing  belonged to the gardeners. Of course she's right.

Which reminds me. How is it we go on with our ordinary lives while we are witnessing a dying planet? Is it denial or magical thinking or the resilience of our species? Or all of it. We keep making art and babies and dinner. All we truly have is this moment and then this moment and then this. Our beloved children, the strangers at the airport, the woman who walks by Eden's house every evening with her little black and white dog, all yearning for the same things; connection, love, acceptance, forgiveness, a comfortable pillow.

Tonight I read about bodhichitta,  the heart/mind that is awake. Fortunately for us, there is always an awakened heart within us. We can access it any time. When I'm feeling especially grumpy or critical or depressed, if I can remember that that awakened heart is here right now, I can begin to turn to another way of thinking or behaving. When I met Elizabeth yesterday,  my heart leapt. Literally. I bathed in the kind regard we have for one another. Can I expand this for strangers? For those I feel ambivalence for or dislike?  Can I treat everyone (and all living things) with kindness?

Dear ones. The open vulnerable heart is a great force for good. Being here with my child, I am reminded of the lengths parents go to protect and care for their children. Can I shine that light on the lizard on the wall, the pomegranate tree by the road, the tomato plant by Eden's front door?

Much love and kindness to all.

In honor of Yogi, the best dog in the world

Kenny, my angelic neighbor, sauntered over last night and asked if I had any use for an AC. Whatttttt?????

He borrowed my wheel barrow and came back with an AC and tools for installing it in my bedroom window. Most of my house is 90-ish and my bedroom is a delicious 74.

I did spend most of the day in the lake. As I will be spending tomorrow as well.

Tuesday I go to LA, WHERE IT IS COOLER THAN HERE.

What the actual fuck.

BTW the dog and cat have melted. Completely. Poor animals covered with fur/hair.

Face timed with Eden. Face timed-what have we come to, is that a word?

She's ok, trussed up but says she fed herself today with one hand/arm. And she told a very funny story about the Rumanian doctor who removed the staples in her head; heavy accent, bright costume jewelry, painted nails, about 60-ish, tut-tutting the staple job, blamed it on the young intern and called Eden honey, as in 'oh honey'. Reminded me of her Hungarian grandmother. As much as my former Hungarian in-laws used to anger me, I admired them. They were survivors, made it to the US as refugees and rebuilt their lives in upstate New York. Their two children went to Harvard and Columbia. Steve, my ex, became a doctor (I know, a stereotype-my son the doctor). But they left Budapest with nothing, just the shirts on their backs. Steve's dad once showed me the backpack Margaret, his wife, made for 6 year old Steve to wear as they escaped the communists that had overtaken their city.

I was an asshole back then. I was young with two small children. I wasn't Jewish and I had daughters, not sons. (yes, I heard that the day I gave birth to Eden) Still, with hindsight, they suffered incredible losses and they survived, they survived. As so many do in this world. They weren't perfect but they loved their grand daughters. And Eden has honored them by her Hungarian cookbook. May it be published!

In other news, we're experiencing a heat wave. The city is freaking out. It's amazing. Seattlites. LOVE to discuss the weather because it's so...um nothing here mostly. Rain? OMG. a bit of snow-apocalypse now. I will admit, it's mighty hot here and we have ourselves to thank for the heating of the planet but we'll get through this bit. Kenny came over with two fans under his arms to offer me as he was getting AC. And I have a standing invite if it gets too much in my house, even the dog is invited.

My solution: go swimming and wear my wet suit until it dries out, then go swimming again etc. Not me wet suit as in neoprene, just my regular polyester suit. Felix swims too and retains wet hair. Sheesh.

I will admit. Felix is pretty limp.

Well dears. I must water the garden as the sun goes down. Tomorrow an early swim and then a quiet day. And a visit to a new baby :-).  I ma have to go jump in the lake one more time...